Sweden Has Turned the Corner

Compared to many (perhaps most) visitors and contributors to this site, my own awakening to the dangers of political Islam came late — around 2010. Despite the mountain of evidence — and bodies — piling up, I did not see the problem. The steady drumbeat of political correctness that was the soundtrack to my life from university onwards had all but closed my mind to anything outside the narrow confines of The Narrative. I have to thank the cartoonists at Jyllands-Posten, the heroic Lars Vilks and the late Christopher Hitchens for throwing a bucket of ice-cold water in my face.

But ultimately it was the jihadists and their murderous rampage who reminded me what is worth fighting — even dying — to preserve.

As someone based in Sweden, and half Swedish by birth, I have always known that my countrymen are given to a desperate longing for consensus and uniformity. Many will go to enormous lengths just to fit in. I watched in dismay as this collective neurosis gave way to mass delusion. With the full support of the mainstream media, national and local government, advertisers and a volunteer army of virtue-signallers ready to lambast anyone with even a mildly differing opinion, Sweden finally ceased to be a nation and became a cult. Doubters and dissenters were pilloried, often in public. This madness reached its apogee in the autumn of 2015, as hundreds of thousands of migrants poured into the country. Most everyone I know was falling all over themselves to send money, clothes and toys to the new arrivals. One or two even started refugee shelters, a profitable business in these parts. 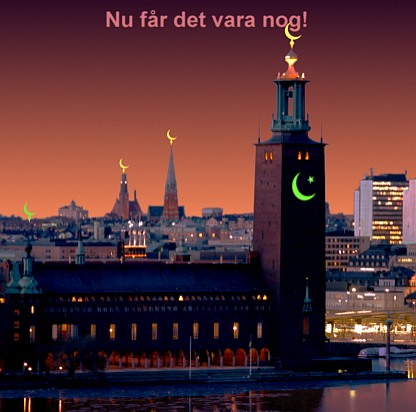 Some 18 months later, we are in a different place. The spell has been irrevocably broken and the country is returning very slowly — one Swede at a time — to its senses.

It’s impossible to pinpoint the exact turning point, but for male friends and colleagues I spoke to at the time, it was clear that the mass sexual predations that took place in Cologne on New Year’s Eve 2015 had a sobering effect. They are almost all husbands and fathers, with many having at least one daughter. Discussions that were unthinkable just a few weeks earlier were held openly, albeit in private settings and not in public spaces. Broaching the subject with Swedish women was a different story. Whenever I pointed out that maybe, just maybe welcoming tens of thousands of young men from misogynistic cultures would put many Swedish women in harm’s way, I was met with an avalanche of denial and the usual false equivalencies. But this is changing too. Following the attack in Stockholm, most Swedish women at last seem willing to entertain the idea that we have a problem, perhaps even a serious one. Some are still in denial, of course, but they are gradually being marginalised. It seems the Overton window has moved a few millimetres to the right.

This mood shift is also reflected in social media. People openly discuss Islam and its many attendant headaches. While this still attracts the usual bile from the eternally outraged, they can no longer count on going into a feeding frenzy unopposed. These are subtle changes, discernible only to someone fully immersed in the culture, and entirely anecdotal. I have no hard data, apart from the steady rise in popularity of the Sweden Democrats, which, according to a recent poll, is now Sweden’s largest political party.

But perhaps the most telling — and shocking even to me — sign of what may lie ahead was the statement by Gustaf Fridolin of the Green Party that refugees who have had their applications denied should be tagged, allowing the authorities to track their whereabouts.

It was not the suggestion itself that was shocking, but where it came from. If there is an active politician in Sweden who represents the “Refugees Welcome” hysteria that swept the country it is Mr. Fridolin. The fact that he, of all people, recommended electronic surveillance in the wake of the truck jihad on Drottninggatan is significant. Politicians are like wind socks, and Mr. Fridolin merely pointed which way the wind was blowing. He was roundly criticised by his own party, but that was to be expected. They have a narrative to cling to.

To me, the current situation in Sweden is akin to observing capital markets in action. Once a market has gone too far in one direction, the trend has to reverse as the current trajectory is unsustainable. The question is always when. I have discovered over the years (to my cost) that just because an outcome is highly likely, or even inevitable, it does not mean it is imminent. The market moves when it is good and ready, and not before. When I read articles/comments about Sweden by people who don’t live here, and have perhaps never even visited, I get the feeling that the country is a lost cause, headed for dhimmitude. I understand why someone might reach that conclusion, but I can assure you it is erroneous. Yes, there will be more attacks, more victims of Islamic terror, more rapes, more rocks hurled at the police in occupied neighbourhoods and more bouts of PC insanity. But each transgression will only serve to energise the counter-trend that is still in its infancy.

To continue the market analogy, I am convinced the hysteria that gripped Sweden has bottomed.

Someone on this site noted dolefully that in some dark future the organ in Stockholm’s Hedvig Eleanora church would be silenced, its broken pipes strewn across Östermalm. I would advise that person to read (or re-read) “The wrath of the awakened Saxon” by Rudyard Kipling. Strictly speaking the Swedes are Goths not Saxons, but they are an equally capable people and share a similar temperament. That is why it is far more likely that it is the bodies of dead Muslims that are strewn across the length and breadth of the land, while the music of Bach is still heard in the nation’s cathedrals.

I do hope you are right!

Muhammad was a false prophet and a pedophile. Islam is nothing but an aboriginal, hateful philosophy using religion as cover.

Sweden is still doomed. You have gone to far down the road that should not be traveled.