With the world still abuzz over the first ever deployment of the GBU-43/B "Mother Of All Bombs" in Afghanistan, where it reportedly killed some 36 ISIS fighters, in a less noticed statement the US National Nuclear Security Administration quietly announced overnight the first successful field test of the modernized, "steerable" B61-12 gravity thermonuclear bomb in Nevada.

In a well-timed statement, just as tensions over North Korea's nuclear program and potential US airstrikes run wild, the NNSA said that in conjunction with the US Air Force, it had completed the first qualification flight test of B61-12 gravity nuclear bomb on March 14 at the Tonopah Test Range in Nevada.

In the press release, the NNSA said that the "non-nuclear assembly test" was dropped from an F-16 based at Nellis Air Force Base and was intended to evaluate "both the weapon’s non-nuclear functions as well as the aircraft’s capability to deliver the weapon."

This test was the first of a series that will be conducted over the next three years to qualify the B61-12 for service. Three successful development flight tests were conducted in 2015. 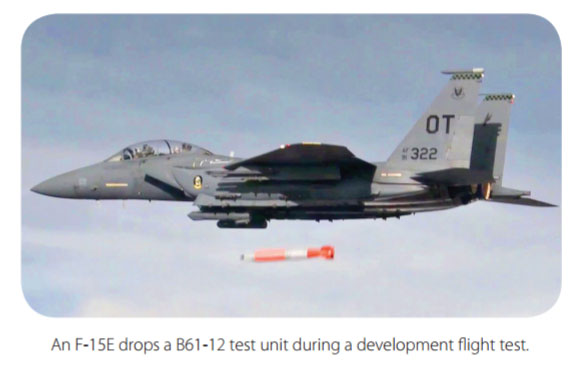 "This demonstration of effective end-to-end system performance in a realistic ballistic flight environment marks another on-time achievement for the B61-12 Life Extension Program,” said Brig. Gen. Michael Lutton, NNSA’s principal assistant deputy administrator for military application. “The successful test provides critical qualification data to validate that the baseline design meets military requirements. It reflects the nation's continued commitment to our national security and that of our allies and partners."

The flight test included hardware designed by Sandia and Los Alamos national laboratories, manufactured by the Nuclear Security Enterprise plants, and mated to the tail-kit assembly section, designed by the Boeing Company under contract with the Air Force Nuclear Weapons Center. 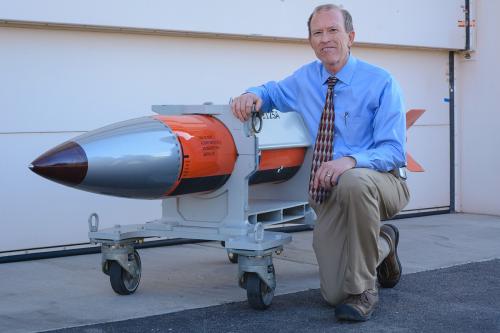 The B61-12 consolidates and replaces four B61 bomb variants in the nation’s nuclear arsenal. The first production unit is scheduled to be completed by March 2020. The original B61 gravity bomb is the mainstay of the Air Force’s nuclear arsenal and one of the legs of the so-called nuclear triad, along with the intercontinental ballistic missiles deployed from either ground-based silos or oceangoing submarines. The B61 nuclear gravity bomb, deployed from U.S. Air Force and NATO bases, has almost 50 years of service, "making it the oldest and most versatile weapon in the enduring U.S. stockpile." Numerous modifications have been made to improve the B61’s safety, security, and reliability since the first B61 entered service in 1968, and four B61 variants remain in the stockpile: the 3, 4, 7, and 11. However, the aging weapon system requires a life extension to continue deterring potential adversaries and reassuring our allies and partners of our security commitments to them.

The B61-12 LEP will refurbish, reuse, or replace all of the bomb’s nuclear and non?nuclear components to extend the service life of the B61 by at least 20 years, "and to improve the bomb’s safety,  effectiveness, and security" according to the NNSA. The B61-12 first production unit will occur in FY 2020. The bomb will be approximately 12 feet long and weigh approximately 825 pounds. The bomb will be air-delivered in either ballistic gravity or guided drop modes, and is being certified for delivery on current strategic (B-2A) and dual capable aircraft (F-15E, F-16C/D & MLU, PA-200) as well as future aircraft platforms (F-35, B-21).

President Trump has endorsed the ambitious and expensive plan to modernize the US nuclear triad, begun under his predecessor.

The March test of the B61-12 was the first in a series to take place over the next three years, with the final design review due in September 2018 and the first production unit scheduled for completion by March 2020.

Once the bomb is authorized for use in 2020, the US plans to deploy some 180 of the B61-12 precision-guided thermonuclear bombs to five European countries as follows:

... although in light of recent developments, and this weekend's Turkish referendum which may grant Erdogan what are effectively dictatorial powers, it may consider reassessing the Turkish deployment. 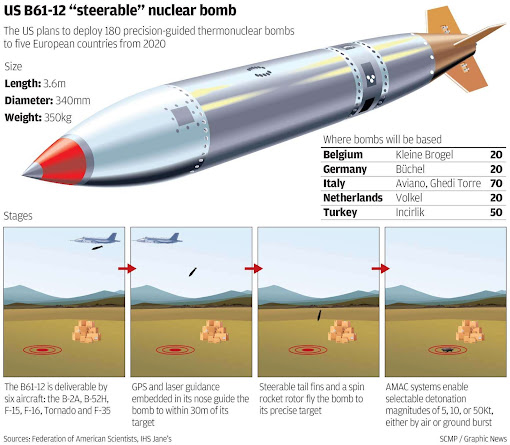 None in Guam or Osan?

And why only 50 kT? The current production is good to 340 kT I think and has "neutron bomb" setting for very low blast yields (like 0.3 kT.)

With the influx of enemy Islamist combatants in Europe - deploying these nukes there is just plain foolish.

I agree with the above commenters- it seems the height of folly to put nukes where the islamists can get their hands on them.

Turkey especially, where Erdogan is trying hard to become Caliphate #2, "We Try Harder to Eliminate Human Rights and Install Sharia."