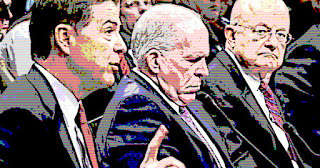 ...“We write to refer the following individuals for investigation of potential violation(s) of federal statutes,” states the letter obtained by this reporter. “In doing so, we are especially mindful of the dissimilar degrees of zealousness that has marked the investigations into Former Secretary of State Hillary Clinton and the presidential campaign of Donald Trump, respectively. Because we believe that those in positions of high authority should be treated the same as every other American, we want to be sure that the potential violations of law outlined below are vetted appropriately...”

...Lynch was referred after concerns were made regarding her decision to threaten with reprisal the former FBI informant, William Douglas Campbell, who first came forward in 2016 with insight into the sale of the Canadian firm Uranium One, which controlled nearly 20 percent of uranium mining interests in the United States, as previously reported...

...As for Strzok and Page, the two FBI employees at the center of the Congressional investigations, the lawmakers seek the criminal referral based on the pairs “interference in the Hillary Clinton investigation regarding her use of a personal email server,” as reported.

The full text of the Congressional referral letter reads as follows:

You can add your voice to the referral at whitehouse.gov!

JimHickey, thanks for starting the petition. I have forwarded the site to about 50 people with large mailing lists. Hopefully, it will do some good.

Our Marxist political elites and their government counterparts must receive the same "equal justice" that the average American would receive if we had participated in such treasonous acts!

Where are the criminal referrals for James Clapper, Samantha Power, and John Brennan?

If at all possible, could you link to the petition that JimHickey (the first commenter) started under your MEDIA section? It is hard for Conservatives to get the word out about such petitions -- especially when they support someone/something the Left hates.

Jim is my new hero!