See, now, this is exactly the kind of thing which makes 2nd Amendment supporters refuse to even consider passing any laws on firearms, which could even help restrict criminals from getting firearms, because we know that what gun grabbers really want is to kill off private ownership of firearms for law abiding citizens using the death by a 1,000 papercuts method. I’ve mentioned this 10 days ago, and here we have them telling us what they really want to do:

Naturally, gun owners are freaking out.

Well, yeah, naturally, because this affects law abiding gun owners 99% of the time, not criminals.

Two weeks before Christmas in 2012, a 22-year-old masked man armed with a stolen assault-style rifle went on a shooting rampage in a crowded shopping mall in Happy Valley, Oregon, just outside Portland, thrusting holiday shoppers into a maelstrom. By the time the bullets stopped flying, three people, including the gunman, had been fatally shot, and a 15-year-old girl was wounded. 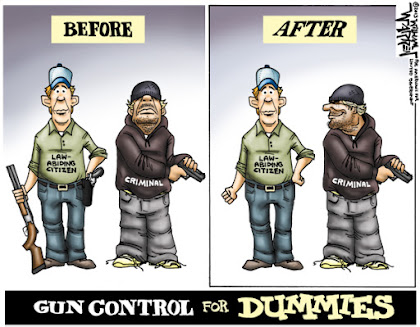 Now family members of the deceased victims are pushing for a ballot measure that would make Oregon one of the few states in the nation to mandate that gun owners lock up their firearms. They contend that such a law could have thwarted the afternoon massacre at the Clackamas Town Center mall.

The measure that Clackamas survivors are now pushing would enact a so-called safe-storage law, under which gun owners would have to lock up firearms not under their direct control. The measure would also require anyone whose guns are lost or stolen to report the incident to law enforcement within 24 hours.

Violations of either provision could result in fines—reaching up to $2,000 if a child picked up the firearm—and expose gun owners to civil liability if their purloined weapons are used to injure someone within five years.

Actually, the law is rather vague on locking up firearms not under direct control: it almost looks as if all firearms have to be locked up with some sort of trigger lock at all times, including when carrying. And, notice, fines on those who have had their property stolen. We do not penalize people who have had other property stolen, such as motor vehicles, that are used to hurt other people. This is all about trying to scare citizens into not exercising their Constitutional rights.

“There’s no appetite by some of the legislative leadership to bring gun bills forward unless the gun-violence prevention advocates make it so difficult for them they can’t ignore it,” said Kemp, himself a gun owner who, along with Yuille, helped found the group Gun Owners for Responsible Ownership.

First, the name of the group sounds just like something the Left would come up with as a distraction from their real agenda. Second, every time we try to pass harsher penalties on actual criminals, Liberals freak out and threaten to sue, they claim raaaaacism, you know the playbook.

Pardon me, but haven't you heard of the gun ban bill in Oregon?
What you're talking about is peanuts.

Many of your points look like opinions based on your over active imagination. Yet you want everyone to accept your thought process as fact even though your conclusions have no legs to stand on.

"gun owners for responsible gun ownership". How bout we form a group called "voters for responsible voting." and since obomo has done more damage to this country than any other president we pass a law that says if you voted for obomo you never get to vote again for president. that would make America safer than any bogus gun laws. btw, none of these laws would have any affect on criminals getting guns. they're called criminals for a reason.

dear Chuck.Opinions don't have legs.We don't accept your thought process as to the appendages of thought processes.Do you fantasize about the legs of your opinions?