10. Lisa Page, Cooperating Witness Against the Deep State
Lisa Page, the DOJ special counsel for the FBI during Obamagate, is a cooperating witness with Inspector General Horowitz. Her testimony -- and text messages -- are laced throughout today's IG report on Andrew McCabe's lies that led to his firing. Page's evidence is very likely instrumental to the more complete IG report due out in May.

9. Andrew McCabe Freaked Out About Reports of His Conflict of Interest
When The Wall Street Journal's Devlin Barrett reported on Andrew McCabe's conflict of interest with respect to the Hillary Clinton email investigation, the then-deputy director had a panic attack.

Barrett reported that the state senate campaign of McCabe's wife was funded to the tune of more than half-a-million by Clinton proxy Terry McCauliffe. In fact, just days after revelations that Clinton operated an illegal email server for all State Department business became public, McCaullife visited Jill McCabe and encouraged her to run for office. Her husband Andrew would, under normal circumstances, have led any investigation into Hillary's illegal actions.

Andrew McCabe, according to recorded testimony, forced his subordinate Lisa Page to secretly leak reports to the WSJ that he was not conflicted and that he, in fact, wanted to continue the Hillary probe. This, it would appear, was a lie.

8. Andrew McCabe Is a Sleaze-Bag
After ordering his subordinates to leak to the Journal, McCabe then denied said leaks to his boss (James Comey) and, as part of his peronsal cover-up, actually ripped other DOJ officials for the leaks that he had orchestrated.

7. Why Hasn't McCabe Been Indicted?
As Brit Hume points out, "The term 'lacked candor' emerges in the IG report on McCabe as an FBI/DOJ euphemism... the meaning seems clear: he lied."

And since lying to the FBI is the kind of grievous crime that Michael Flynn and Martha Stewart were charged with, why hasn't McCabe? 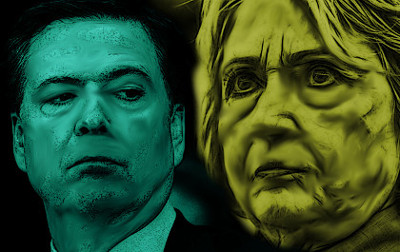 6. Priorities
The raid on Trump attorney Michael Cohen was said to be precipitated by illegal activities related to New York City taxi medallions, a business with which Cohen has been involved.

The priorities of the DOJ seem clear: taxi medallions over the Boston Marathon bombers, the San Bernardino terrorists, the Pulse Nightclub shooters, and Florida school shooter Nikolas Cruz, to name but a few.

5. J. Edgar Comey
Then-FBI director James Comey briefed President-Elect Trump on the existence of the "salacious and unverified" Russian dossier. He admits in his book that he never informed Trump that the Hillary Clinton campaign and the DNC had paid for the "dossier".

4. J. Edgar Comey, Part II
In his book, Comey asserts that it is the job of law enforcement "to keep our leaders in check". Funny, that key fact never turned up in any of my Civics classes.

Comey's statement reads, "It is... wrong to stand idly by, or worse, to stay silent when... a president brazenly seeks to undermine public confidence in law enforcement institutions that were established to keep our leaders in check".

And here I thought that our law enforcement institutions were supposed to enforce, you know, laws.

At least two U.S. law enforcement personnel -- not to mention hundreds of Mexican nationals -- were murdered as a direct result of Holder's actions.

[Note: As an aside, I actually made the Obama "enemies list" for my reporting on Fast and Furious. I wear that as a badge of honor.]

He does not, in fact, compare the Clinton syndicate to anything. You know, the folks behind the Loral/China missile deal, the Uranium One scandal, the Clinton Foundation pay-for-play scams, the inflated price of speeches, the election-rigging against Bernie Sanders, the passing of debate questions by confidante Donna Brazile to Hillary, and a litany of other skulduggery.


This smart hypothesis (credit not mine) has gained a serious amount of credibility and potential validation today. pic.twitter.com/SYMQra9vln

I'm patiently waiting for the indictments of the entire cast of Deep State actors who attempted to overthrow a duly elected president.

Tar and feathers may be a good start.

This gets more convoluted by the day. I admit to having trouble following the narrative. BUT, one thing I am sure of, as one who has followed politics for YEARS: Hillary and Obama are in this up to their eyeballs. None of these clowns should still have top secret access, which they do. It's unbelievable. And a GOFUNDME for McCabe? Outrageous. If a conservative/republican pulled that shit there would be rioting in the streets. I continue to support President Trump and I do believe he is smarter than they all are and will come out ahead.

If you're patiently waiting for those indictments then truly you have the patience of a saint. Without a special prosecuter, who's going to ever bring indictments against the top tier of both DOJ and FBI?

It appears Huber has been working hand-in-hand with DOJ Inspector General Horowitz to begin the prosecution of malefactors.

In fact, multiple Congressional representatives have blurted out the fact that grand juries have been convened to address these matters.

Now that the IG report is due out in May, my personal hope is that the first indictments will begin at that time.