Former Director of National Intelligence James Clapper spilled the beans on Tuesday in an exchange with Joy Behar on The View that will undoubtedly make its way into the history books.

The question was whether the FBI had ordered undercover agents to “spy” on the Trump campaign in the spring and summer of 2016, well before Donald Trump had won the Republican nomination for president.

Here is the transcript:

Behar: … So, I ask you, was the FBI spying on Trump’s campaign?

Behar: Well, why doesn’t he like that? He should be happy.

Clapper: Well, he should be.

Clapper’s admission – for that’s what it was – was astonishing: the FBI had in fact infiltrated the Trump campaign and was spying on the candidate and his team.

That’s a first. And it’s on the record.

Remember all the indignation from the deep state when Trump claimed that the FBI had “wiretapped” Trump Tower? While Trump might not have used the term of art, he was right. He and his campaign were the targets of hostile U.S. government surveillance.

Clapper has tried to wrap himself in the flag, spinning his monumental admission as an effort to “protect” the Trump campaign from nefarious influence from bad Russian actors.

But such claims fall flat for one simple reason: whenever the FBI discovers through a counter-intelligence investigation that an American has been targeted by a foreign power, they almost always inform the American to warn them off.

I know. It has happened to me. (More on that below). 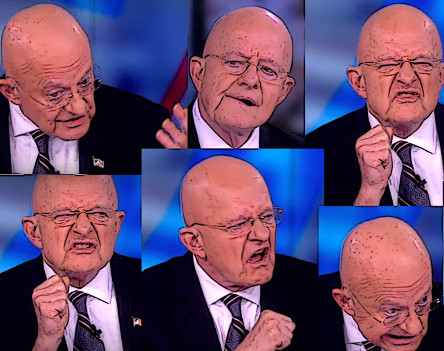 So when did the FBI warn the Trump campaign of the hostile Russian attempts to penetrate the campaign?

Certainly not in the spring of 2016, when the FBI detected the first effort to penetrate the Trump campaign by a suspected Russian agent, Joseph Mifsud.

How do we know this? Because in their cockamamie indictment of George Papadopolous, Robert Mueller’s legal team told us that a suspected Russian agent, code-named “the Professor,” twice approached Papadopolous in London with an offer to provide damaging information on Hillary Clinton obtained by the Russian government. Papadopolous then blabbed about the stolen emails at a bar with an Australian diplomat, an event the FBI claims “triggered” the investigation into the Trump campaign.

The next attempt to penetrate the Trump campaign came soon afterwards, when Stefan Halper, a long-time CIA asset, again dangled the Clinton emails to a Trump campaign volunteer, Carter Page. As we learned on Wednesday, Halper also met with top Trump advisor Sam Clovis, in a failed attempt to insinuate his way into the campaign.

But Halper wasn’t acting on behalf of the Russians. As we learned just recently, he was an FBI mole.

Clapper wants us to believe that the intelligence community was protecting the Trump campaign and that the President should thank them.

But the truth is just the opposite. Once the intelligence community detected some type of approach by Mifsud – possibly by a Russian agent, possibly not –- they took no steps to notify Donald Trump or anyone involved in his campaign in order to “protect” our political process. Instead, they launched a classic undercover operation in an attempt to entrap campaign workers, and hopefully the candidate himself, into accepting Russian offers to help them against candidate Clinton.

But this also failed, because there never was any Russian offer. The Russia-collusion spin, jinned up in January 2017 by Clapper, Comey and Brennan, was just a sham, a deception to take our eyes away from what had really been going on.

They wanted to hide the sting operation. And no wonder: it’s called treason, a series of overt and covert acts aimed at overthrowing the duly elected government of the United States.

Who was behind the plot against Trump?

Clearly Clapper was involved; he has admitted as much. Senior officials at the FBI and the DoJ also were involved, but according to their accounts, not until they filed the first wiretapping request with the FISA court in late July 2016.

So what other U.S. intelligence leader would have the power and the authority to engage covert assets operating overseas in an operation against an American political campaign? Only one: CIA director John Brennan.

Both Brennan and Comey have been furiously attacking Trump in recent weeks, as Congressional investigators and the Department of Justice Inspector General gets closer to revealing their illegal acts. I believe they both should be indicted for treason.

In 1996, I was reporting on the Gore-Chernomyrdin commission, which the U.S. and Russian governments established to exchange information on (then) alleged Russian assistance to Iran’s ballistic missile programs.

One of my sources at the time was a Russian diplomat, ostensibly a press officer, who offered hard information on the Russian companies helping Iran that he said had been presented by the Russian government to Vice President Al Gore.

I suspected my “source” was an intelligence officer. But I was able to corroborate his information and found it to be genuine—if embarrassing to Al Gore, who was trying to downplay Russia’s involvement in Iran.

I was not terribly surprised when I got a call from an FBI agent, who asked to meet me in a public park in Georgetown. He proceeded to tell me that the Russian was an intelligence officer the FBI was keeping tabs on, and that I should be careful about his efforts to cultivate me.

I thanked the agent, and promised to let him know if the Russian ever pumped me for information (he did not). The Russian was later targeted by the FBI in March 2001 for his alleged involvement in the Robert Hansen case and quietly left the United States before he could be expelled.

That’s how the FBI is supposed to work. Under Jim Comey and his merry band of partisan hacks, it went woefully astray.

Read more at FrontpageMag.com. Related: 12 FACES: Some Truly Disturbing Images of James Clapper on the View.

Judging from the photos, Clapper should incorporate bran into his diet.