The hits just keep on coming as the DOJ Inspector General's report is due out within days, if not hours.

John Solomon, writing at The Hill, offers a comprehensive perspective on the FBI's long relationship with Russian oligarch Oleg Deripaska, starting with Robert Mueller. The digest version is that Mueller's FBI once solicited Deripaska to pony up $25 million to help arrange the rescue of former FBI agent Robert Levinson, captured in Iran in 2007 while working for the CIA.

What Deripaska was offered by Mueller to help is left unmentioned. Deripaska came through, but Levinson was left stranded on Iranian tarmac by Hillary Clinton and Barack Obama for reasons yet unknown.

The story of the Levinson operation was confirmed by more than a dozen individuals both inside and outside the FBI. Deripaska, his lawyer, the Levinson family, and a retired FBI agent all confirmed the account. And Robert Mueller was, according to the report, kept fully apprised of the high-profile and sensitive operation.

But the real news is buried a dozens paragraphs down: 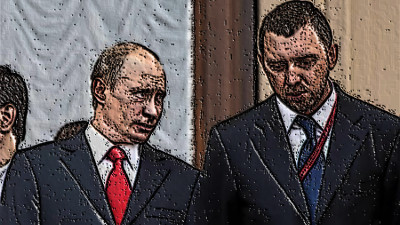 Deripaska also appears to be one of the first Russians the FBI asked for help when it began investigating the now-infamous Fusion GPS “Steele Dossier.” [Adam] Waldman, his American lawyer until the sanctions hit, gave me a detailed account, some of which U.S. officials confirm separately.

Two months before Trump was elected president, Deripaska was in New York as part of Russia’s United Nations delegation when three FBI agents awakened him in his home; at least one agent had worked with Deripaska on the aborted effort to rescue Levinson. During an hour-long visit, the agents posited a theory that Trump’s campaign was secretly colluding with Russia to hijack the U.S. election.

“Deripaska laughed but realized, despite the joviality, that they were serious,” the lawyer said. “So he told them in his informed opinion the idea they were proposing was false. ‘You are trying to create something out of nothing,’ he told them.” The agents left though the FBI sought more information in 2017 from the Russian, sources tell me. Waldman declined to say if Deripaska has been in contact with the FBI since Sept, 2016.

Deripaska was reportedly informed by the trio of agents that he should keep an open mind with respect to Russian collusion with the Trump campaign.


So why care about some banished Russian oligarch’s account now?

First, as the FBI prepared to get authority to surveil figures on Trump’s campaign team, did it disclose to the Foreign Intelligence Surveillance Court that one of its past Russian sources waived them off the notion of Trump-Russia collusion?

Second, the U.S. government in April imposed sanctions on Deripaska, one of several prominent Russians targeted to punish Vladimir Putin — using the same sort of allegations that State used from 2006 to 2009. Yet, between those two episodes, Deripaska seemed good enough for the FBI to ask him to fund that multimillion-dollar rescue mission. And to seek his help on a sensitive political investigation. And to allow him into the country eight times.

I was alerted to Deripaska’s past FBI relationship by U.S. officials who wondered whether the Russian’s conspicuous absence from Mueller’s indictments might be related to his FBI work.

They aren’t the only ones.

Harvard law professor Alan Dershowitz told me he believes Mueller has a conflict of interest because his FBI previously accepted financial help from a Russian that is, at the very least, a witness in the current probe.

“The real question becomes whether it was proper to leave [Deripaska] out of the Manafort indictment, and whether that omission was to avoid the kind of transparency that is really required by the law,” Dershowitz said...

Remember when they said there was no "deep state"?

Robert Levinson was left behind because he may have witnessed Hillary's plane crash in Iran.The one that left her with severe injuries that would have disqualified her for her 2016 run for the presidency.She's had numerous medical problems that hadn't been apparent,at least,until the crash in Tehran.Her run in 2016 was so overwhelmingly important to her and Obama that they were willing to leave a witness behind rather than risk the story getting out.Levinson deserves better.

Yet we are to believe that Sessions is conflicted? And even worse, he acts as though he is. Very big disappointment!