THE MUELLER/SALEM WITCH-HUNT: “[A] limitless pit of political hatred dressed up as law enforcement"

A federal trial judge’s merciless thrashing of lawyers for out-of-control Special Counsel Robert Mueller prosecuting Paul Manafort suggests that the former Trump campaign manager’s conviction on unrelated bank fraud charges may not be the foregone conclusion the media keeps telling us it is.

The independent-minded behavior of T.S. Ellis III at a May 4 hearing on a motion to dismiss charges against Manafort seems so unlike that of so many of his applause-seeking brethren on the federal bench. It also seems to indicate there are still federal judges out there who are not establishment toadies shackled in thrall-like servility to the Deep State. (A transcript of the day’s proceedings may be viewed here.)

Appointed by President Reagan in 1987, Alexandria, Va.-based Judge Ellis “could be the ultimate nightmare” for Mueller, Richard Pollock notes at the Daily Caller, adding that a dismissal of the charges against Manafort “could be a major wrecking ball to Mueller’s overall case in his Russian collusion case against President Donald Trump.”

At the hearing last Friday, Judge Ellis reminded those in the courtroom that he has handled several espionage cases and currently holds one of the government’s highest level security clearances, as he gave Mueller team member Michael R. Dreeben, a dressing-down.

The financial charges against Manafort arise from events way back in 2005 that are well outside Mueller’s original mandate to probe the Trump campaign’s alleged electoral collusion with Russia in 2016. “C’mon man!” the judge said in a series of caustic, sarcasm-laden encounters.

“If I look at the indictment, none of that information has anything to do with links or coordination between the Russian government and individuals associated with the campaign of Donald Trump,” he told Dreeben. “So I don’t see what relation this indictment has with anything the special prosecutor is authorized to investigate.” 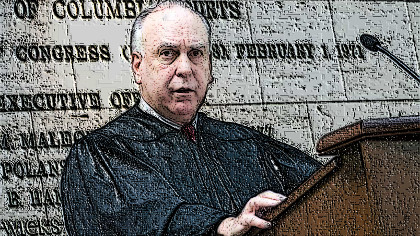 Ellis attacked Mueller, claiming the prosecutor’s real intention was, “to exert leverage on a defendant so that the defendant will turn and provide information on what is really the focus of the special prosecutor,” which is President Trump.

Dreeben answered, explaining that the “investigatory scope” granted to Mueller’s office allowed prosecutors to include wrongs from more than a decade ago.

“My question to you was, how does bank fraud and these other things that go back to 2005, 2007, how does that have anything to do with links and/or coordination between the Russian government and individuals associated with the campaign of Trump?”

The document creating the special counsel’s office allowed prosecutors to go on a fishing expedition, Dreeben said in different words. “We are not limited in our prosecution authority to crimes that would fit within the precise description that was issued in this public order,” he said.

Judge Ellis would have none of it. He told Mueller’s team members their real goal was to get Manafort to “sing” in order to hurt President Trump. “I’ve been here a long time. The vernacular is to sing,” he said.

Dreeben said his office is following the directives issued by Rosenstein, who has oversight responsibility for Mueller. One of those documents was 75 percent redacted, the judge said.

“Why don’t I have a full copy it?” Ellis asked.

“Well, let me use a phrase that I’m fond of that I used to use with my children,” the judge said sarcastically. “I can’t use it with my wife, but I’ll be the judge of whether it relates to the others.”

Dreeben said he would ask the intelligence community if the redacted portions of the classified memo could be shared with the judge.

“Yes, of course, you may do that,” Ellis said. “If any part of it is classified, it won’t surprise you to know that a district judge is fully cleared. In fact, I have several espionage trials underway,” he said.

The judge added, “I must tell you that I'm exercising uncharacteristic restraint on my part not to require you to tell me about those things, but I think I have an adequate record now.” He gave Dreeben two weeks to get back to him.

Judge Ellis then lectured Dreeben, eventually thanking him for his “entertaining” arguments.

Mueller’s team has been accused of partisanship, and for good reason.

Although Justice Department guidelines prevent Mueller from considering political affiliation in the hiring process, as of February, not even one of the 16 lawyers known to work for him at the time was a registered Republican. (Mueller is nominally a Republican, a tired talking point left-wingers recite ad nauseam, though his true allegiance is to the Washington swamp.) Thirteen of the 16 lawyers are registered Democrats, and 11 are Democrat donors.

Three of the team members listed in the transcript as appearing at the May 4 hearing have given campaign contributions to Democrats.

At the American Spectator, Ben Stein praised Judge Ellis, saying he “just dropped a bomb right down Mueller’s smokestack and it’s blowing him up.”

“And suddenly the emperor had no clothes,” Stein writes.

“The Mueller/Salem witch hunt was revealed… a naked political vendetta, a crude attempt to use a nonexistent crime to dethrone the President.” The investigation is “[a] limitless pit of political hatred dressed up as law enforcement. Something much too much like a lynch mob of media, politicians, and pornographers out to overthrow the Constitution.”

Stein speaks the truth, of course, so his comments will be ignored.