RUSH: Why Rudy Brought Up the Cohen Payment to Stormy

Rudy Giuliani appeared last night on the Fox News Channel with Sean Hannity and other interviews later this morning back on Fox with some other people. And the reaction to Rudy, in particular his explanation of the $130,000 payment to Stormy Daniels, a couple people, I think more than a couple, think that Rudy stepped in it here. That Rudy has unknowingly just destroyed Trump here, just nailed Trump to the wall on an illegal campaign donation or some other violation of federal election campaign finance law.

I have a different take on this.

And it’s all predicated on the fact that Rudy and Trump both know that Cohen’s office had been raided. Now we’re told that Cohen’s phone calls and his phone lines had been tapped. And so they have to believe, they have to operate on the assumption that the Feds know what Cohen did and why and when and so forth, and so there would be no sense now in telling anything at variance with that, in an effort to get in front of it, in an effort to kind of negate it or nullify it.

There’s no sense in maintaining a story or telling a story that is at variance with what you think they have learned based on the Cohen raids. I think that is probably a good explanation for why Rudy is even dealing with this or even talking about it. It’s fascinating to me that because the left and because the media so desperately want Trump to have committed some violation of law somewhere that they just knee-jerk reaction assume that it’s happened.

And yet every instance in this investigation for two years now, how many times have we been told, how many leaks have there been, how many stories have been written and aired about all of these so-called violations that not only Trump engaged in, but members of his campaign, members of his administration. And yet, as we sit here today, nobody can announce a single ethical or criminal violation that Trump has made. And yet over these two years — and, by the way, every one of these instances has a short life span. 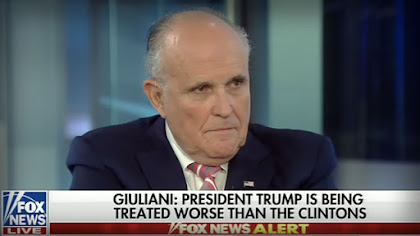 These people get way ahead of themselves because they’re unable to keep their desires in check. And so they stumble across a piece of news, and they make it fit into the story that they are weaving, and they start reporting onto as though it fits the narrative that they have established. And then time goes on, and we find out the narrative’s all wrong because the facts are all wrong.

So they drop that, and they move on to some new, recent discovery that Trump supposedly did this or did that. And this has become a cycle that keeps repeating. And with every new so-called discovery, everybody’s emotions get all ramped up again. “Oh, my God, look what they found on Trump! Oh, my God, it’s over! Oh, my God, did Trump really do that? Oh, my God!” and they start the cycle, and it never ends, it just keeps repeating.

And at the end of each one of these cycles they have bupkus. What really frosts everybody, they haven’t got anything. I don’t think, in modern American politics, there’s anybody who’s been investigated any more than Donald Trump has. You look at the number of people, the number of agencies, the amount of money that’s been spent trying to find anything that would be useful or that would work in getting rid of Donald Trump. This guy must be amazingly clean.

You know, they’re still desperately hoping to get those tax records. Oh, yeah. The tax returns, because that’s gonna prove whatever they think it’s gonna prove. They’ve got it in their heads all of these crimes that Trump has committed. And something else that’s damaging. As each one of these episodes comes up, as each new discovery of potential Trump criminality or malfeasance, then all kinds of things get put into gear. We have the legal analysis; we have punditry; we have the bloggers. And they all start examining in detail every possible outcome related to this new discovery.

And in the process, every premise is accepted! Every one of these premises at some point has been accepted. The first premise, Trump colluded with Russia. The premise was accepted, a lot of people believed it and waited for the evidence to be found, but no evidence was found because the premise was wrong. Then they moved to the premise of obstruction. And they can’t find any evidence of obstruction. Mueller can’t find anything yet. It’s time to shut this down, but they’re gonna keep looking. But whole industries have been created. We have legal pundits, we have legal bloggers, and with every new discovery we get months — well, maybe not months. We get days and sometimes weeks of analysis and careful analysis and thought about what could have gone on and where is Trump culpable and what does maybe Trump have to escape this, when there’s nothing to begin with.

And yet accepting each premise that Trump has committed a crime serves to establish a baseline foundation that Trump is corrupt, when no evidence of this has been found. This $130,000 payment is the most recent example of the hysteria that attaches itself to each new discovery. And, by the way, each new discovery may have two or three life spans. Like, this is the third life span of the $130,000 payment.

It used to be that we were looking for a guy that threatened Stormy in a parking garage in Vegas. And we had the sketch done, and the sketch looked like it was Tom Brady. We had to throw that out ’cause Tom Brady wouldn’t have been threatening Stormy. So had to throw that out. Whatever became of that? See, this is the point. All these things we learn that’s gonna get Trump, ’cause everybody knows Trump hired that guy, right, Trump hired the guy, or Cohen did, to go tell Stormy that she’s got a beautiful daughter, it’d be a shame if anything ever happened to her.

What ever became of that? It’s just over there, it’s been forgotten. The Drive-By Media causes an absolute firestorm over something, get everybody all worked up about it. Then some new thing happens, new premise, everybody off on that, everybody forgets the previous thing, but it has a cumulative effect, particularly in the minds of the low-information voters that Trump is corrupt, that they just can’t find it, the guy’s that good, Trump is that good at hiding his crimes.