A TERRIFYING GLIMPSE INTO GERMANY'S FUTURE: The Refugee Hostel 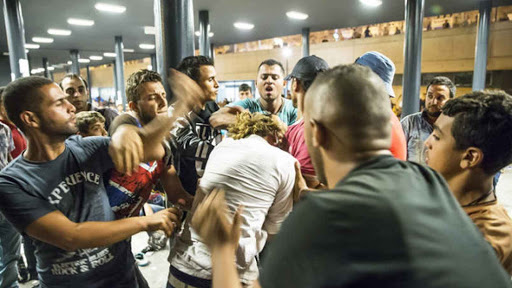 They fled religious hatred, rape and violence in their homelands for the “safe” haven of Germany -- only to encounter the same, brutal conditions in their new accommodations: the refugee hostel.

Violence in refugee centers became a national topic in Germany last October, only weeks after Federal Chancellor Angela Merkel invited into Europe one million, mainly Muslim, refugees. But exposure of this disgraceful situation appears to have had little effect, as German newspapers are reporting this month that conditions remain unchanged.

In fact, life in German refugee hostels has now become so unbearable thatreligious minorities, women traveling alone or with children, and homosexuals are fleeing their accommodations. For them, according to one paper, the word "hostel" has become synonymous with ‘"defenselessness".

The constant harassment and mistreatment at the hands of Muslim male refugees is not only becoming intolerable and dangerous, but, for some, life-threatening.

“Torn bibles and insults, ripped off crosses and even blows to the face, the complaints about violence in the refugee centers do not let up,” the German newspaper, Die Welt, stated recently. 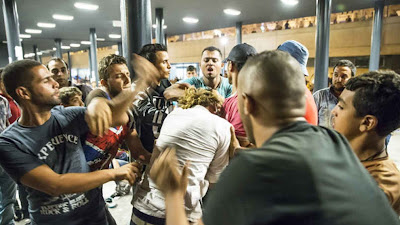 According to Rainer Wendt, chairman of the German Police Union, outbreaks of violence in German refugee centers were occurring before last August. In the first six months of 2015, police were called out 1,288 times to refugee asylums and registered 499 crimes. One problem is definitely the overcrowding, Wendt said, but there are also “knallharte” (very brutal) criminal structures among the refugees.

Most violent incidents occur between Muslims themselves. They form groups, Wendt says, according to “ethnicity, religion or clan structure and go at one another with knives and self-made weapons.” And the fights, which can involve dozens on each side, concern “power struggles” and are “above all, religious or politically motivated.” Numerous violent disputes have ended in death.

“Here the Sunnis fight the Shiites, there are Salafists of different brands …women are forced to wear the veil. Men are forced to pray. Islamists want to install their values and order there,” said Wendt.

But among the mistreated minority groups, one is especially targeted for abuse: Muslim converts to Christianity. Many are from Iran and Afghanistan where Christians are a persecuted minority and Islamic law demands that they be put to death for leaving the faith.

One human rights organization official says the chances of a Muslim convert to Christianity, unwilling to hide his faith, being subjected to violence or mobbing in a refugee center is “nearly 100 percent.” And the situation is only going to get worse.

“Among those arriving now, a not insignificant portion is at least on the level of the Muslim Brotherhood in its religious intensity,” he said.

Pastor Gottfried Martens, who counts six hundred Christian converts from Islam in his Berlin parish, agrees. Martens, who baptized many of them himself, said, it is “above all Christian converts from Islam who have to suffer as a minority” in the hostels. Christians are not allowed to prepare their meals in the kitchens and “whoever does not pray five times a day in the direction of Mecca is mobbed.”

“Almost all of them have huge problems in their hostels,” said Martens. “Strictly believing Muslims there convey the view: Where we are, sharia rules, our law rules.”

Which causes one to wonder: What does this situation bode for Germany’s future once these “refugees” are let loose in society?

One Christian refugee from Iran is probably also asking himself this same question. In an anonymous interview with Die Welt, he said he would never have thought he would face religious persecution in Germany like that in Iran. There, he had belonged to an underground church and fled after the secret police had arrested his brother for attending one too. After crossing Turkey on foot, he made it to Germany where he thought he could finally live out a Christian life without fear.

But he was wrong. Placed in a hostel with mostly strictly believing Sunni Syrians, the young Iranian says he cannot openly profess his faith or “then I will be threatened.”

“During Ramadan, they wake me up before dawn and say I should eat before the sun comes up,” he told Die Welt. “When I decline, they say I’m an “infidel." They spit at me. They treat me like an animal and threaten to kill me.”

The one other group suffering equal, and possibly worse, abuse in German refugee asylums is women traveling alone. Overall, women make up 25 percent of the migrant population. And they, as well as children, are particularly vulnerable to sexual violence. The federal official responsible for this area in refugee asylums nation-wide says reports of such violence reach him daily from around Germany.

As regards the number of such incidents, no one knows for sure. But according to the Psychosocial Center for Refugees, “there are many.” In a center in Giessen, there were 15 reported cases of sexual abuse of women in one month, leading police to investigate cases of rape and forced prostitution. The situation there is described as “a second- or third-world situation…like a UN refugee camp in Africa.”

But the “dark number” regarding sexual assaults is thought to be “high.”

“It is difficult to bring a refugee woman to make a statement to the police,” states one article on the subject. “There often exists cultural inhibitions or the fear an act of violence could negatively affect their asylum application.”

Women are usually greatly outnumbered by men in the hostels. In one center, of the 600 residents, only 87 are women and 34 are underage girls. Such is their fear, they rarely go out their doors, keeping to themselves. As a result, women refugees often feel like “fair game” for the male residents and of having been “abandoned” to them.

“For many women in their accommodations, it is like a co-ed visiting a men’s prison,” said one woman, a former hostel employee.

In some hostels, men are reported to be “always lying in wait.” One Iranian Christian woman said male residents in her hostel are constantly trying to grab her between the legs or touch her hair, a foreshadowing of the mass sexual assault of women in Cologne on New Year’s Eve. And, again, a foreshadowing of what is in store for women once these savages descend in large numbers on all of German society.

A female Russian journalist, who fled to Germany after running afoul of the Putin government, said after living in four different refugee hostels that she “would never have thought such conditions are possible in Germany.”

In one asylum, the violence between two groups of men, she relates, was so severe that “many police came every evening.” She also lived in fear her door could be broken open at any time. Once, conditions were so bad, she did not shower for five days. And women only went to the washroom in pairs.

But it was in the women’s washroom that the Russian journalist witnessed the most “humiliating” occurrence. In three of the hostels, a man was constantly there, as if standing guard, changing his “watch” regularly with others. The intruder may have been charging money to use the facilities, as sometimes happens in refugee centers, although she never had to pay. Nevertheless, she believes these men wanted to show women by their unwanted presence “we despise you, you have nothing to say.”

“I comprehended that this had system,” she said. “…The women there are worth nothing, nothing at all. They are being treated like dogs.”

When the Russian refugee asked one asylum administration why it wasn’t doing anything about the danger women face, she got the impression it was being “silently accepted.” The ten thousand private security men stationed in refugee hostels around Germany are obviously providing insufficient protection. Refugees have also sometimes complained about their behaviour.

Some politicians and German police chiefs, like Wendt, demanded last October, after receiving the initial reports of violence, that religious minorities, women traveling alone and unaccompanied children should have separate accommodations. Which would be the sensible solution. But little has been done despite the federal official’s admission that “abusers have it very easy establishing closeness to women and children and committing acts of sexual violence.”

The reason for such inexcusable, and perhaps criminal, indifference, as for much else that is destroying Western civilization, is ‘political correctness’. By separating the refugees by gender, religion and ethnicity, liberals believe one would already be setting up “parallel societies” in the hostels. As well, separation would represent “a victory” for the Islamists as it repudiates Western values regarding equal treatment, thus hindering integration. Such liberals believe that “intensively religious Muslims must learn to live with other religions.”

Good luck with that.

Incredibly, some liberals have convinced themselves the hostels’ problems are not gender, religion or ethnicity related but rather are owed only to organizational factors like cramped living conditions or better staff training. For example, one woman, who researches gender-specific violence with a German human rights organization, sees no “special connection between the hostels, the residents’ origin and the potential for violence.”

“What happens there also happens to German women outside the accommodations,” she said.

With the existence of such indifferent and shameful attitudes among some of those involved with the hostels, it is not surprising one female observer has concluded that women refugees “have no hope for help and understanding.”

And in their dangerous naivety liberals, as usual, fail to recognize the true reality: Strictly believing Muslims, upon crossing the German border, do not automatically become potential human rights activists who are “suddenly filled with the spirit of Western tolerance.” Instead, they shout out ISIS slogans in the refugee hostels and threaten Shiites with beheadings. Tolerating and respecting women, different ethnic groups and religions is not high on their list of things to do in Germany.

Thus, the real tragedy of the refugee asylums is that people, living human beings, are being heartlessly and needlessly sacrificed on the leftists’ altar of utopian ideas, offerings to their multicultural god. Little account is taken of the naked fear women, children and religious minorities are experiencing. Once again proving that Liberal “humanitarianism” only extends as far as its politically correct beliefs.

Americans were champions of women's 'rights' before women ever got the vote, it was part of our dna. That Musloids are changing this cultural deference for good to subjugation and domination we should be perplexed? Is NOW even relevant any more?