Clay Waters, writing at Times Watch, highlights noteworthy aspects of a speech by Bill Keller. Keller is the Executive Editor of the New York Times, the second-leading source of information for anti-U.S. propagandists (al-Jazeera remains number one by a narrow margin).

Last week, Keller delivered the "Hugo Chavez Young Memorial Lecture", sponsored by London's ultra-liberal Guardian newspaper, and "said some things to his journalistic friends he might not have felt comfortable telling a more general audience."

...At least since the election of 2000, with its attendant questions of legitimacy, some of the wide, reasonable middle of the American electorate has gravitated to angry and intolerant fringes, right and left. There are many reasons for this -- including the proliferation of partisan blogs, hate-mongering radio broadcasts and intemperate television shout shows -- but a president plays a considerable role in setting the tone of public discourse... dividing the electorate into mistrustful camps and pandering to their fears was an explicit strategy of the president's political wizard, Karl Rove.

Interesting. I've never heard these memes before. You say the 2000 election was stolen by Bush?

That the president divided the country into mistrustful camps (say, by soliciting MorOn.org to portray him as Hitler)?

And you say that Rove was the diabolical force behind it all? Fascinating. I've never heard such things before.

...After our decision to report on the government's warrantless wiretapping program, some members of the administration's amen chorus proposed that the Times be charged with treason under the Espionage Act. A right-wing radio pundit suggested that I be put to death... And another defender of the national interest posted maps to my apartment -- and my publishers' -- on the internet, for the benefit of any lunatics who wanted to drop by and set us straight. Those of you who are acquainted with New York apartment life can imagine how that went over with my co-op board. 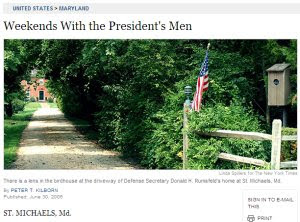 Keller fails to relate that his paper (in June 2006) published the locations of the weekend homes of Vice President Dick Cheney and former Defense Secretary Donald Rumsfeld.

...And I would argue that in this clattering, interconnected, dangerous world, journalism that cuts through the noise has never been needed more. We have a war going very badly in Iraq, and another one in Afghanistan where our declaration of victory looks very premature...

Waters' apt retort: If Keller still thinks the Iraq war is "going very badly" even after the troop surge, perhaps he should take a moment to read the front page of his own paper. Well, no one else seems to be reading it these days, so who can blame him? 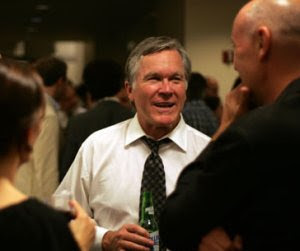 ...we are agnostic as to where a story may lead; we do not go into a story with an agenda or a pre-conceived notion. We do not manipulate or hide facts to advance an agenda...

Here's proof of Keller's "agnostic" approach: remember Al Qaqaa? This was the weapons cache that American forces reportedly failed to secure after the fall of Saddam's government. In the week leading up to the 2004 Presidential Election, Keller's newspaper treated this story as though a large asteroid were about to hit the Earth (which, by the way, would have been Bush's fault).

The New York Times ran a week's worth of front-page stories on Al-Qaqaa; it featured 16 total articles and columns and seven anti-administration letters to the editor over an eight day span. 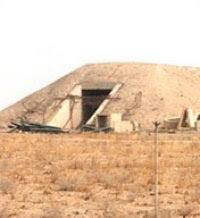 Oh, and they left something else out: The weapons might have been removed before the invasion. Over the course of the week, the Times was forced to concede, often grudgingly and obliquely, that the weapons may not have been there for U.S. forces to secure in the first place...

So, anyway, I'd forgotten about all this. Bush won the election despite the al-Qaqaa drumbeat from Kerry and his surrogates in and out of the press.

But Byron York, my NR colleague, didn't forget. He wondered, whatever happened to The Biggest Story on Earth? The answer, it turns out, is nothing. The Times has not run a single story about the al-Qaqaa story since November 1 [2004]...

We strive to preserve our independence from political and economic interests, including our own advertisers. We do not work in the service of a party, or an industry, or even a country.

The Times doesn't work in the service of the United States? You won't get an argument from me on that assertion.

When there are competing views of a situation, we aim to reflect them as clearly and fairly as we can."

Rimshot? Can we get a stinkin' rimshot now? 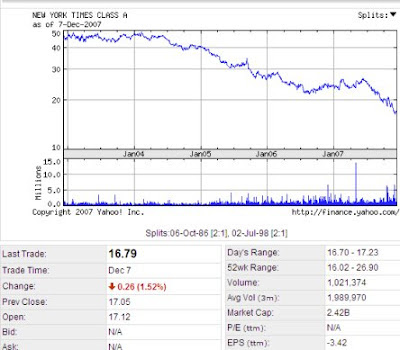 Keller, I'm glad you haven't been charged with violating the Espionage Act yet, though heaven knows you deserve it. Instead, I'm patiently awaiting the day that you're fired for your wonderful stewardship of the Times. How's that Internet strategy working out for you, putz? Oh, and I hear that the Huntington (West Virginia) Herald-Dispatch may be looking for an editor.
at 9:54 AM
Email ThisBlogThis!Share to TwitterShare to FacebookShare to Pinterest
Labels: Democrats, MSM, New York Times