Surprising? A bit. I really don't know how much pull NR has though. From my comments and emails, I gather NR is viewed very suspiciously by a large swath of the conservative electorate, which views them as meddlesome yuppie RINOs.

Meanwhile, also from Drudge, Democrats have been instructed to avoid all criticism of Huckabee, viewing him as an "easy kill" in the general election... 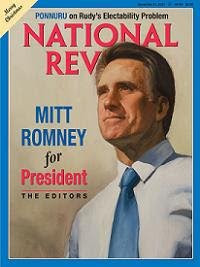 Democrat party officials are avoiding any and all criticism of Republican presidential contender Mike Huckabee, insiders reveal... The Democratic National Committee has told staffers to hold all fire, until he secures the party's nomination... The directive has come down from the highest levels within the party, according to a top source.

Within the DNC, Huckabee is known as the "glass jaw -- and they're just waiting to break it."

...In fact, as the story broke over the weekend that Huckabee said he wanted to isolate AIDS patients back in 1992, the DNC ignored the opportunity to slam the candidate from the left.