Having surged to a surprising lead in Iowa, GOP presidential candidate Mike Huckabee appears to be melting down faster than a popsicle lodged in Michael Moore's jowls. Larwyn points us to several weird Huckastories, many of them analyzed for us by Dan Riehl:

* Huckabee called for a quarantine of AIDS patients in 1992: Dan Riehl points out that as early as '87, Princess Di and other notables were shaking hands and hugging AIDS sufferers to reinforce the notion that the disease could not be passed through casual contact.

Kuhn: I don’t know to what extent you have been briefed or been able to take a look at the NIE report that came out yesterday ...

Kuhn: The NIE report, the National Intelligence Estimate on Iran. Have you been briefed or been able to take a look at it —

Kuhn: Have you heard of the finding?

...Kuhn: Does the United States face a higher burden of proof on Iran in light of Iraq, in the international community?

Huckabee: Probably so. First time I’ve been asked a question like that. But I think probably so because there is going to be a real anxiety for us to take any type of action without there being some very credible and almost irrefutable intelligence to validate our decision... 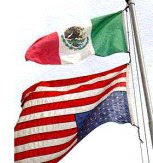 * Huckabee supported the disastrous bi-partisan immigration reform bill: The Washington Times reported that the candidate "...supported President Bush's immigration plan and claimed that opposition to Bush's proposal was driven by 'racism or nativism' and that it wasn't amnesty."

That message should really resonate with Iowans.

* Huckabee's made some quaint observations about homosexuality: Riehl ("there goes the Log Cabin vote") highlights a Huckaboo-boo:

Asked if he thinks homosexuality is sinful, he said, “Well I believe it would be -- just like lying is sinful and stealing is sinful. There are a lot of things that are sinful. It doesn't mean that a person is a horrible person. It means that they engage in behavior that is outside the norms of those boundaries of our traditional view of what's right and what's wrong.

I feel homosexuality is an aberrant, unnatural, and sinful lifestyle, and we now know it can pose a dangerous public health risk.

* * *
Any more stories like these and the governor might as well change his name to Huck Paul.
at 9:03 PM
Email ThisBlogThis!Share to TwitterShare to FacebookShare to Pinterest
Labels: Huckabee