Kyle-Anne Shiver's latest article in the American Thinker deserves an expansive audience. National, actually. Acting as a proxy for interested citizens, she poses a critical question to Hillary Clinton.

Exactly, precisely, specifically... what would define your husband's access and duties in your Presidency?

Bill Clinton is not just any former President... To this day he has the ignominious distinction of being the only sitting President cited for civil contempt by a federal judge, for lying in a deposition. Judge Susan Weber Wright, a former student of Bill Clinton's at the University of Arkansas School of Law, authored the citation... [and Clinton] lost his law license for five years.

...there is [also] the matter of the 177 pardons and commutations Bill Clinton issued as his final act of office, which were not fully investigated at the time... According to then FBI Director, Louis Freeh, no one in the FBI, nor the Attorney General's office, nor the Justice Department was ever even consulted for input before these last-hour pardons were issued... 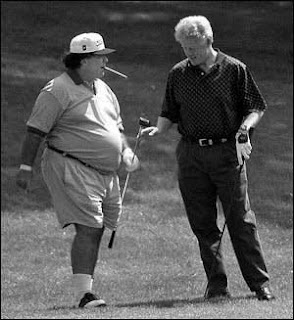 ...The pardon of Marc Rich, an infamous fugitive who had made a fortune dealing illegally with the Iranians, brought a bit of scrutiny and accusations of quid pro quo use of the Presidential pardon... [and] it came to light that Denise Rich, Marc Rich's ex-wife, had given more than $1 million to Democrat causes, and another $450,000 to fund the Clinton Presidential library... The more pressing issue now might be whether the pardoned Marc Rich has resumed dealings with the Iranians, at a time when Iran poses perhaps the gravest danger faced by America...

Then there was the largely ignored pardon of Bill Clinton's own brother, Roger, convicted of possession and dealing cocaine. The act of pardoning a relative would, in itself, seem to substantially weaken the integrity of the Office of the Presidency. But there's quite a bit more to this story...

[In 1984]... both brother Roger and pal [Dan] Lasater were convicted [of] possessing and selling cocaine. [Clinton also pardoned] old pal and co-fleecer of Arkansas taxpayers, Dan Lasater... ...Lasater's chief assistant, Patsy Thomasson... made her way into the Clinton White House. Clinton appointed her to the position of the White House's Director of the Office of Administration, and ironically, put her in charge of its drug testing program...

You must read the entire article. The only nitpick I have is that Hillary's own dealings may be more troubling than her husband's.
at 8:31 PM
Email ThisBlogThis!Share to TwitterShare to FacebookShare to Pinterest
Labels: Crime, Democrats, Hillary