Chart: Repeal Obamacare to Save Our National Defense

In January, unless dramatic action is taken, the Defense Department will suffer even deeper, more devastating cuts. Consider: the one damn thing the federal government was chartered to do by the nation's founders, its most important mission, was securing the nation's citizens. And it has been put at dire risk by infantile, Utopian progressive fantasies of wealth redistribution and equality of outcome.

What's the easiest way to prevent the evisceration of our national defense?

...The gross spending for Obamacare’s insurance expansions [now] totals $1.4 trillion for the 2013–2021 period—the same stretch in which $1.2 trillion in across-the-board spending cuts known as “sequestration” would apply... 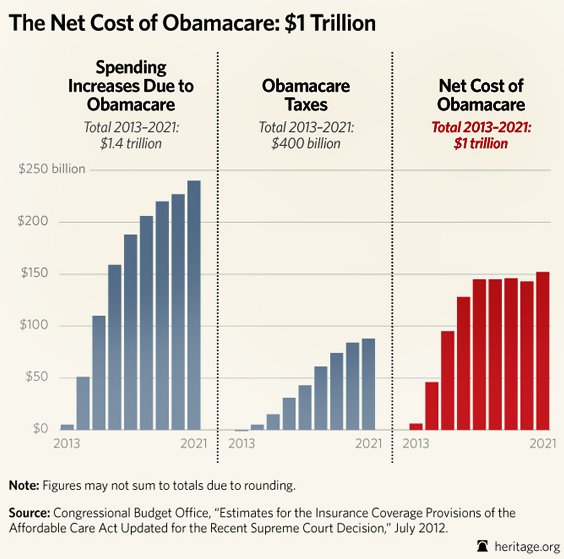 [The CBO] also shows $400 billion in net 2013–2021 tax hikes, part of the onerous “Taxmageddon” also slated to start in January. Thus, the net cost of Obamacare would be about $1 trillion for 2013–2021. That’s how much could be saved by cancelling the planned spending and taxes in the President’s government takeover of health care.

...The cuts would [otherwise] shrink defense spending by about 10 percent through a crude, indiscriminate, and irresponsible mechanism. They must be replaced. What better substitute than two huge new entitlements that have not yet been implemented, that [more than] half the public doesn’t want, and that the government cannot afford? Take away Obamacare, and the entire sequestration is replaced almost dollar for dollar—without tax hikes.

...The Heritage Foundation previously listed the top five reasons for repealing Obamacare: (1) to stop adding deficits and debt, (2) to help prevent Taxmageddon, (3) to protect religious freedom, (4) to keep health care decisions with doctors and patients, and (5) to clear the way for patient-centered reform. Now make it an even half-dozen: (6) repeal Obamacare, and prevent an indefensible sequestration.

Repeal of Obamacare is paramount.

What can you do? Tell everyone you know to vote the straight Republican ticket.

Taking the Senate, holding the House, and giving Obama a pink slip will help save our national defense apparatus while repealing the Democrats' version of socialized medicine.

We need to do plenty of work on the RINOs, but this much is sure: Obama will devastate the military as surely as night follows day.

Remember When Nancy Pelosi and
Obammunist Drones in The Senate Said
Obamacare Would 'Save Us Billion$?'