Well, this should have a delightful impact on small business hiring. Or should I say "firing".

President Obama has made raising taxes on “the rich” a central plank of his re-election campaign. Yet even many Democrats are questioning the wisdom of hiking taxing on job creators while the economy is still struggling and unemployment is still lingering at over 8 percent.

They are right to be concerned. According to calculations by The Heritage Foundation’s Center for Data Analysis (CDA), the average American with $250,000 or more in income can expect an average $24,888 tax increase next year under Obama’s proposed policies. 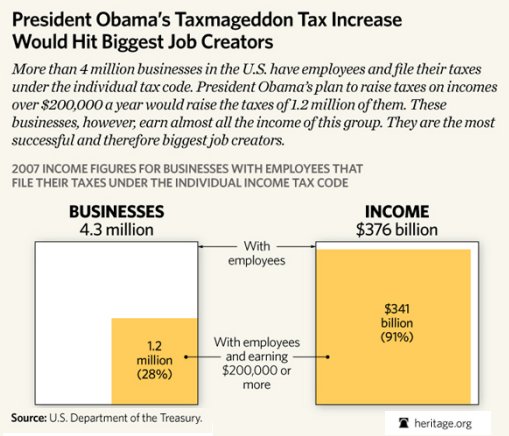 ...The $24,888 figure is often enough for a salary, and despite what some proponents of the tax hike have argued, many of these successful small businesses do have employees. According to the Treasury Department, 1.2 million small businesses both had employees and earned more than $200,000 in 2007. So the President is putting about 1.2 million jobs—perhaps even more—at risk with this tax hike...

Now, if Democrats had half-a-brain among 'em, they'd slash taxes across the board while stripping the size of government down to a manageable size. The entire, mammoth, federal leviathan is an enormous anchor on the private sector. It produces nothing but regulations, taxes, fees and dictates. It exists solely to leech the private sector of life.

But despite reams of evidence, Democrats refuse to allow businesses to thrive. They are bound and determined to crush entrepreneurship, innovation and liberty.

Which is why we must fire every Democrat in November. Let 'em have a taste of life in the private sector.