Perfect: one of Obama's unconstitutional recess appointments to labor board has ties to organized crime

The good news? At least the illegal appointee never chopped off the pinkies of debtors with a rusty axe (to my knowledge):

Richard Griffin, whom President Obama illegally appointed to the National Labor Relations Board, never had to answer a single question from U.S. senators – or even file the standard paperwork for nominees – prior to assuming his post in January. 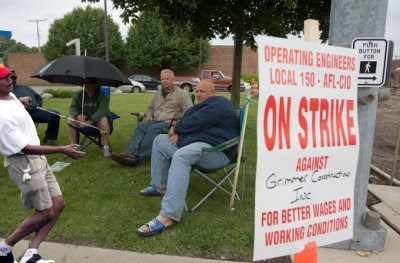 Because of Obama’s unconstitutional non-recess appointment, Griffin’s connections to numerous International Union of Operating Engineers locals with extensive criminal rap sheets were never explored. In January, Scribe documented how Griffin blocked efforts to reform corrupt chapters of the IUOE as its general counsel.

Now, seven months after the non-recess appointment, Sen. Orrin Hatch (R-UT) is looking for answers to those questions. In a letter to Griffin sent on Wednesday, Hatch asks for information about his relationship with the numerous IUOE workers who have either been tied to mob activity or were convicted of crimes during Griffin’s tenure at the union.

While Griffin did not personally represent any of those criminals, he did, as we noted in January, advance policies that made it more difficult for rank-and-file union members to challenge corrupt leaders in local elections. Those policies “make it difficult for a lot of guys to speak up,” explained Mike Quigley, who failed to unseat a boss of IUOE Local 150 who three years later was indicted for violations of federal labor law.

Sounds to me like Griffin is the Obama administration in microcosm.

The Great Pretender should have immediately been impeached-this back door crap doesn't get it. When he saw Congress was going to pussy out like they did when he said he wasn't going to enforce a duly passed law, DOMA, he knew they wouldn't do diddly so onward he rolls with more unConstitutional EOs
MM