What Mr. Trump should have done was sign an order resettling all of the Muslim “refugees” in rich, liberal-populated areas and near Democrat Party lawmakers' homes. Not just liberal cities, but near the posh areas.

It would have been interesting to see how Democrats would have objected. Instead, we end up with this bit by former Obama flunky David Benjamin:

With the stroke of a pen, the president has seriously jeopardized America’s safety and standing. 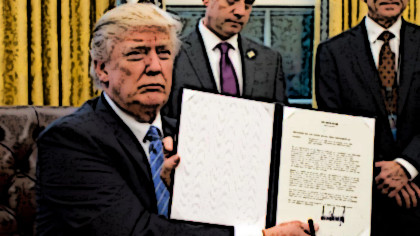 With his executive action suspending the admission of refugees to the United States and temporarily halting the entry of citizens from a variety of Muslim countries, President Donald Trump made a quick down payment on a key campaign promise. He also set the U.S. on a disastrous course—one that threatens to weaken our national security and diminish American global leadership.

The order signed on Friday calls for a temporary ban on visas for individuals from Iran, Iraq, Syria, Sudan, Libya, Yemen and Somalia; a 120-day suspension of the resettlement of all refugees; and an indefinite ban on the resettlement of Syrian refugees.

The NY Times features the full order here, which includes:

In order to protect Americans, the United States must ensure that those admitted to this country do not bear hostile attitudes toward it and its founding principles. The United States cannot, and should not, admit those who do not support the Constitution, or those who would place violent ideologies over American law. In addition, the United States should not admit those who engage in acts of bigotry or hatred (including “honor” killings, other forms of violence against women, or the persecution of those who practice religions different from their own) or those who would oppress Americans of any race, gender, or sexual orientation.

Obviously, that’s just too much for Liberals. It should have included those from Saudi Arabia, Afghanistan, and Pakistan. What the whole order essentially does is take a pause for refugees from countries that tend to have a lot of hardcore extremist Muslims, to give the whole apparatus a chance to make sure their vetting programs work. It is an America First program. What’s more important to us? Protecting Americans from being raped by the “refugees”, or the rapey refugees?

It is hard to find any real basis for this action. During the campaign, Trump made frequent, unfounded claims that we have a “dysfunctional immigration system” and that unknown people are pouring through our borders. But over the past decade and a half, U.S. immigration enforcement has improved vastly to the point where it bears scant resemblance to the system whose vulnerabilities were exposed on 9/11. Travelers from all over the world are screened three or more times, with their names run through databases that draw on staggering amounts of intelligence and law enforcement information. The process flags all manner of misdeeds or suspicious information.

Interesting. Democrats have been telling us for decades that the “immigration system is broken”, of course, in an attempt to provide amnesty for illegals. As far as the system flagging issues, it helps when they actually check. And it’s hard to check on people coming from backwards 3rd world hellholes. What do see is that a goodly chunk refuse to assimilate. Are the Europeans checking? Look at the vast number of issues occurring in the EU from all these “refugees.”:

In fact, Trump’s action has the potential to trigger violence by individuals who are already leaning toward extremism, including some with mental illness. There are more than a few people who experienced personal setbacks, including ones in which officialdom was involved, who interpreted their experience through the prism of the jihadist narrative and took violent action.

So, to prove that Trump is wrong, those Muslims who already hold extremist views will move from words to getting violent? This is the argument? Really?

Join me in signing the petition at whitehouse.gov: https://petitions.whitehouse.gov/petition/immediately-release-donald-trumps-full-tax-returns-all-information-needed-verify-emoluments-clause-compliance