Defense secretary nominee Gen. Jim “Mad Dog” Mattis believes ISIS is “al-Qaida on steroids” and must be defeated in head-to-head “battles of annihilation” that leave “no survivors” on the enemy side, according to a recent discussion he participated in with a conservative think tank...

...Mattis made the eye-opening remarks in a little-noticed interview with Stanford University’s Hoover Institution in Palo Alto, Calif., where he is a visiting fellow...

...Mattis doesn’t believe in “managing” the Islamic State threat or just running ISIS out of Middle Eastern towns, but pulverizing the Islamist enemy.

He said the US currently has the forces available to wipe out ISIS, which operates primarily out of Syria and Iraq, but “they’re not in place” due to a lack of “political” will to deploy them, an attitude that is expected to change under a Trump administration. 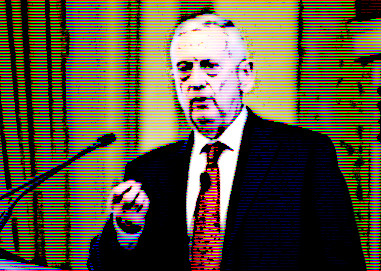 “They’re a lot like al-Qaida philosophically, but operationally, they’re like al-Qaida on steroids. And when you put that together, they’re a uniquely capable organization,” he added during the revealing 2015 Hoover interview. “But the fact is, they couldn’t last two minutes in a fight with our troops.”

Mattis said America and the West can no longer tolerate “the assassinations, the mass killings, the mass rapes that are going on there,” to say nothing of the ISIS-directed and -inspired terrorist attacks plaguing both European and American cities.

Added the general: “If they want to fight, they should pay a heck of a price for what they’ve done to innocent people out there.”

Mattis didn’t pull any punches regarding Iran, either, which has aggressively pursued the development of nuclear weapons while threatening both the US and Israel.

Through its proxy Hezbollah, the Islamist regime has carried out terrorism around the globe, including attacks that have killed American citizens. In 1983, for example, an Iran-trained suicide truck bomber killed 220 of Mattis’s fellow Marines while they slept in barracks in Beirut. Iran is also responsible for IED-related deaths of US soldiers in Iraq...

...An invasion of Iran would be tougher than Iraq because Iran is surrounded by mountains, making it hard for tanks and artillery to pass. Behind the towering ranges, the terrain becomes unstable salt flats and dry lake beds oozing with thick black mud that would make it even more difficult to advance on Tehran.

Asked about Beijing seizing islands in the South China Sea and clandestinely building airstrips and other military installations there, Mattis says the US should no longer turn a blind eye to such territorial expansion in contested international waters. He says the US will need a larger naval presence there to check Beijing’s military aggression.

“We may have to give the Navy a bigger slice of the budget,” he added, to help reassure Taiwan and other allies in the region threatened by the communist army’s growing mischief.

“There are a lot of nations out in that region that would like to see more US Navy port calls in their harbors, from Vietnam to the Philippines, from Malaysia to Taiwan and Japan,” Mattis said.

He added that while the first option in the growing conflict ought to be diplomacy, “Sometimes the best ambassador you can have is a man-of-war.” ...[He] revealed in the interview that he does not agree with President Obama that the US combat role in Afghanistan is over.

“We have irreconcilable differences with the Taliban,” he said.

Added Mattis: “They will continue to support al-Qaida, they will continue to do this kind of terrorism that they conduct over there every day. And as they do that, for us to declare arbitrarily that the war is over may not match the reality on the ground.”

I think I have me a crush on General Mattis, in a completely manly and platonic way, of course.

Gen. Mattis on the Iran Deal: “I think it is an imperfect arms control agreement — it's not a friendship treaty. But when America gives her word, we have to live up to it and work with our allies.”


I agree completely. But America never gave her word.


Obama illegitimately gave his word, not America. In fact, America was specifically prevented from giving her word.

America "gives her word" on treaties through the Senate's Advise and Consent power. The Constitution require senators, two from each state, to agree by a two-thirds vote for the specific purpose that our word as a nation is broad-based, authentically given as a nation. Not on the whim of single tin-pot potentate.

Obama subverted that authentic national consent by calling this Treaty an "Executive Agreement". It is, in fact, a One-Man Diktat, a Dear Leader-style subversion of the Constitution never before seen in this Republic.

Furthermore, Obama conspired with Iran, Russia and other foreign entities to lie to the American people about the terms of this Pre-Emptive Unconditional Surrender--and the lying is still underway to this very moment.

And if I'm not mistaken, it is an "Executive Agreement" not even signed by Iran's executive, essentially making it a deal Obama cut with Obama. Perfect. And then handed to his Ayatollah as a gift.

There was not even simple majority support for this madness, let alone the super-majority support envisioned by the Framers. America is not obligated because America never consented.

America was prevented from giving her word...until she finally got to speak on Election Day.

That election result is America's word on the subject, and that is what should be honored.

Mattis' reply on the Iran deal was deeply disappointing and insufficient.
Hussein Obama's treachery (most likely hashed out with the help of the Iranian-born poisonous viper, ValJar) MUST be abrogated very quickly and with extreme prejudice. The longer Hussein's deal exists to support the vast terror regime of the Ayatollahs, the closer we get to islamofascist wars of annihilation.

This gives rise to the concept of Islam's Three Demands or Three Questions: convert, submit or die (resisting).

As Islamic nations gain access to nuclear, biological and other advanced weapons of mass destruction and the means to deliver them, either by ballistic missile or by immigration of people who are incubating some horrible genetically engineered new disease, its willingness and ability to wage vicious war against the West will only increase. At present our best defense is to hold such people at a distance. That will become less of a defense as time passes.

You may not be interested in Islam, but Islam is "hell-bent" on forcing you and your nation to convert or submit.