A superb open letter to NBC's executive team by "Captain America", spotted at Weasel Zippers and edited only sligthly for readability:

I honestly don't give a rat's ass about President Donald Trump's tax return. I highly doubt your claim that 70 percent of Americans want to review his return. Most people don't even know how to review a 1040 and supporting schedules. Besides, you were so accurate in your polls during the election and predicting who would win.

In fact, I have about zero percent confidence in your reporting. I took a statistics course in college. The first day of the course my professor said you can make stats say anything you want them to say. So every time you flash your "trusted" poll numbers up on the screen, I know you are spreading fake news and B.S. It's unfortunate that the poorly educated and low information Americans don't understand that. But that is your target audience isn't it?

How about some real reporting? Like how George Soros is the big money behind 50 of the groups who organized that pathetic women's march in DC on Jan 21? Or why it's acceptable for NBC comedy writers to pick on a 10-year old boy, Barron Trump? 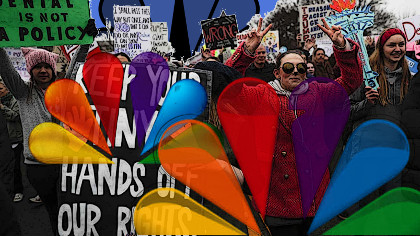 There would have been holy hell if Katie Rich had said that about the Obamas' children or Chelsea Clinton. But it's totally acceptable because Barron's father is a Republican.

Do you not see the hypocrisy? Of course you can't. These lies and hypocrisy is why President Donald Trump is our country's president.

How come you will not look at the Comet Pizza revelations? Too close to the money, I suppose.

How could Hillary Clinton remember enough to write books, but always,always claim, "I don't remember", under oath.

Hillary Clinton is the candidate who stood in front of the coal miners and said,"because we are going to put a lot of coal miners and coal companies out of business,right?" She then tried to walk it back.

You carried water for her during the entire campaign. Let's talk about all the money from the Middle East where women are treated like chattel.

Funny how the donations to Clinton sham charities have dried up since it became obvious they have no influence to sell. And, of course, you never reported how the Clinton screwed over Haiti.

True patriots do not see racism in every nook and cranny or every action. The Obama regime, with your assistance, played the race card so often it wore all the ink off.

I have been called a racist and a bigot for eight years an I am neither. It is time you stop beating the drums of divisions. You didn't with Obama. Stop doing it with President Trump!

They will not read it. They do not care what you think, you are wrong. Remember the lady tech company ceo, she blasted middle America for the way they lived, pretty much said they would have to change if they wanted her around. Even if some brown-noser in the back office reads it, he will trash it as right wing hate. They will never listen unless you hit them in the pocket book. After the violent unhinged display we have been witnessing. The attacks with thrown batteries, trying to light peoples hair on fire, gang style beatings, and the joyous afterglow that they feel after the violence, the calls for death and disease on Trump voters, they have shown they are not listening, stop trying. They are the enemy and they will kill you if they can, and they will be heroes, thanks to people like Negligent Broadcasting Network.