From NRO: "A Worthy Successor to Antonin Scalia".

Gorsuch is an originalist, as represented by this paragraph: 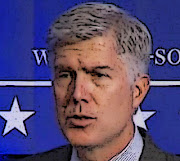 Judges should instead strive (if humanly and so imperfectly) to apply the law as it is, focusing backward, not forward, and looking to text, structure, and history to decide what a reasonable reader at the time of the events in question would have understood the law to be — not to decide cases based on their own moral convictions or the policy consequences they believe might serve society best. As Justice Scalia put it, “if you’re going to be a good and faithful judge, you have to resign yourself to the fact that you’re not always going to like the conclusions you reach. If you like them all the time, you’re probably doing something wrong.”

Erick Erickson: "Judge Gorsuch is the one nominee who matches Antonin Scalia’s intellectual pedigree and will unite all the factions within the Republican Party. This is a very wise move by President Trump. Even his most ardent critics on the right will have to commend President Trump for this nomination... It is rock solid."

New York Times: "At 49, Judge Gorsuch is the youngest nominee to the Supreme Court in 25 years, underscoring his potential to shape major decisions for decades to come. In choosing him, Mr. Trump reached for a reliably conservative figure in the Scalia tradition but not someone known to be divisive... Judge Gorsuch’s personal connections to Justice Kennedy are no accident. By choosing a familiar figure, several officials said, the White House is sending a reassuring signal to Justice Kennedy, 80, who has been mulling retirement."

at 8:04 PM
Email ThisBlogThis!Share to TwitterShare to FacebookShare to Pinterest
Labels: Justice, Trump

Let the nagging, scolding, and weasel wording begin. We will soon see a grand display of whining about how a judge must be able to see "nuance" in the law. Nuance in this context is how liberals navigate through hard logic and firm words to justify getting the result they want no matter how strongly the law (or the Constitution) say otherwise.

As Jesus said to the Pharisees of his day: you are children of your father, and he was a liar (and a murderer) from the beginning. The truth is not in you.