Historic California Sequoia Collapses From Climate Change or a Rainstorm, But Mostly a Rainstorm


Did you hear this one? 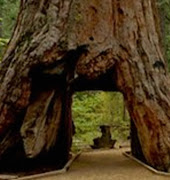 The tree was hollowed out in the 1880s to allow tourists to pass through it, and even allowed cars, but more recently has hosted only hikers. It was part of the “Big Trees Trail” at the state park.

Jim Allday of Arnold is a volunteer at the park who was working there Sunday. He said the tree went down about 2 p.m. and “shattered” on impact.

So, of course, since all these storms are being blamed on ‘climate change’, we get this:

The blood of the Giant Sequoia is on the hands of climate change deniers https://t.co/EF7DwblCuo

No such thing as climate change??

Yes, because there were no storms before Trump.

We did the Shrine Drive-Thru Tree.

....and not because some yahoo hollowed out a whopping great hole in the trunk, of course.

It "was one of California's few tunneled-through sequoias" remaining.

Duh! It seems that killing half of the support roots and removing half of the trunk strustural support has some effect on lifespan. Most other non-tunneled sequoias did not fall over. Most of the other tunneled trees have already fallen.

Notice that this tree fell in the direction of the tunnel, toward a side which had dead roots and no support. Sequoias have shallow root systems, about 4 feet deep. Killing its roots on one side of the tree creates a relatively unstable "saucer" to rest on.