Soros and the March of Hate

On Saturday, the nation’s capital was inundated with masses of loud, obnoxious, foul-mouthed Trump-hating women (and some men) at what was billed the “Women’s March on Washington.” The Guardian called the event a “spontaneous” action for women’s rights, while Vox spoke of a “huge, spontaneous groundswell” behind the march.

While the mainstream media bombarded news consumers with news stories claiming few Americans were interested in the inauguration festivities, television ratings for President Donald Trump’s inauguration were the second-highest Nielsen has recorded in 36 years, drawing 30.6 million TV viewers across 12 networks. Factoring in live streams provided by the networks, YouTube, Facebook, Twitter, and other online portals adds millions more viewers to the total. But what happened Saturday at the “Women’s March” was not spontaneous. No mass rallies are, especially on the Left.

This so-called “protest”, like the violent attacks orchestrated by the DisruptJ20 coalition on pro-Trump events such as Friday’s “DeploraBall” at the National Press Club, was not an organically generated demonstration.

The usual culprits were involved behind the scenes using the same fascistic tactics they used to shut down the massive Trump campaign rally at the University of Illinois at Chicago in March last year. 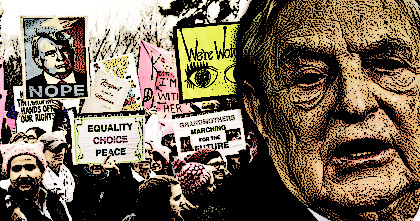 The groups that organized the Women’s March on Washington on Saturday were underwritten by radical currency speculator George Soros, the same man who says Communist China’s system of government is superior to our own and that the United States is the number one obstacle to world peace.

The Soros people brought in protesters from all over the country to express their displeasure with Donald Trump on his first full day as president of the United States. These left-wingers don’t accept the votes of the 63 million Americans in 3,084 of the nation’s 3,141 counties or county equivalents who chose Trump as president. They keep telling themselves the lie over and over again that Trump is somehow not a legitimate president even though he received a majority of Electoral College votes, as the Constitution requires.

Writing in the New York Times, Asra Q. Nomani writes that “the march really isn’t a ‘women’s march.’ It’s a march for women who are anti-Trump.”

Nomani is a former Georgetown journalism professor and Wall Street Journal reporter who describes herself as “a lifelong liberal feminist who voted for Donald Trump for president.”

As someone who voted for Trump, I don’t feel welcome, nor do many other women who reject the liberal identity-politics that is the core underpinnings of the march, so far, making white women feel unwelcome, nixing women who oppose abortion and hijacking the agenda.

Nomani burnt the midnight oil poring over, in her words, “the funding, politics and talking points of the some 403 groups that are ‘partners’ of the march.”

According to Nomani, among the Soros grantees designated as “partners” in the Women’s March on Washington are MoveOn, American Civil Liberties Union (ACLU), Center for Constitutional Rights, Amnesty International, and Human Rights Watch.

In a spreadsheet she links to in her article she identifies plenty more organizations that are partners in the march that have received grants through the two major Soros philanthropies, the Open Society Institute and the Foundation to Promote Open Society.

One of the angry women to show up in Washington was the entertainer Madonna who told the crowd of Trump-haters that she thought many times about “blowing up the White House” but had decided against it because it “wouldn’t change anything.” She is expected to be investigated by the Secret Service. On stage, Madonna wore a “pussyhat” created for the occasion and used the F-word four times. The vagina motif among leftist protesters is nothing new. Code Pink has been using it for years. But it was given new life after audio footage was published during the campaign that captured Trump’s locker room remark, “grab ’em by the pussy.”

The marchers took the vulvar vulgarity a step further. Apart from the usual pro-choice and male-bashing placards, they carried signs reading: "My neck, my back, my pussy will grab back"; “Stay cunty”; "Pussy trumps tyranny"; "Keep your politics off my pussy"; "Mike Pence has never satisfied a woman in his life"; "Support your sisters not just your cis-ters"; "We are the grand-daughters of the witches you could not burn"; and "It's feminist not feminazi[.]"

The atmosphere in downtown Washington wasn’t much different from the Democratic National Convention in Philadelphia last summer. The same in-your-face radicalism and hatred of cops and white people.

So many washed-up celebrities turn to political activism as people stop caring about them. It’s a coping mechanism Mother Nature invented to ease them into irrelevance. They shout and carry on and we forget about them.

Angela Davis, the academic and former Black Panther, spoke at the event. She was described by Elle as a “[c]ivil rights activist.” The article left out that she used to be a fugitive and that she ran for U.S. vice president in 1980 and 1984, alongside Gus Hall, on the ticket of the Communist Party USA. In 1991 she was expelled from the CPUSA for opposing the coup against then-Soviet leader Mikhail Gorbachev. She joined an arguably more radical group called the Committees of Correspondence.

Women's rights are human rights all over the planet and that is why we say freedom and justice for Palestine. We celebrate the impending release of Chelsea Manning. And Oscar López Rivera. But we also say free Leonard Peltier. Free Mumia Abu-Jamal. Free Assata Shakur.

Davis saw no need to tone down her rhetoric because she was addressing true believers.

Her co-religionists were busy trying to burn down Washington in the days prior to her address.

Unrepentant terrorist and Obama pal Bill Ayers showed up in Washington for the inaugural festivities with his terrorist wife, Bernardine Dohrn.

“On our way to demonstrate for several days in Washington,” Ayers wrote on his blog Jan. 19. The same day Ayers appeared on a TV show hosted by a fellow small-c communist, “The Big Picture with Thom Hartmann,” on the Russian government controlled-RT America network.

Former President Obama launched his career in electoral politics in 1995 in the Hyde Park, Chicago living room of Ayers and Dohrn. They hosted a fundraiser for Obama for his run for the Illinois State Senate.

Austin, Texas-based anarchist Lisa Fithian also came to Washington to cause trouble. She led the union goons and anarchists who rioted during the 1999 World Trade Organization meeting in Seattle. She also organized riots as part of the Occupy Wall Street and Black Lives Matter movement and community-organized in post-Hurricane Katrina New Orleans.

She was part of the “queer dance party” Jan. 18 that was intended to intimidate Mike Pence at his pre-inaugural home in the Chevy Chase neighborhood in Northwest Washington.

"We are here to celebrate the queer liberation and say that love will trump hate," Fithian told CNN. "Mike Pence needs to find his heart and recognize that this is a country that needs to be loving and welcoming to everyone. If they want to make America great again, we actually need to embrace our humanity."

Black mask-wearing rioters destroyed private property a few blocks from the White House, smashing windows at a Bank of America branch, a Starbucks, and a McDonald’s. They set cars and trash cans on fire and assaulted police using crowbars, bottles, and sticks. They blocked uniformed Air Force officers from entering the inauguration grounds. They injured at least six cops. About 3,000 local, state, and federal law enforcement officers were stationed in Washington, along with 5,000 members of the National Guard.

Perhaps unaware that he works for their friends in the Russian government, rioters torched the limousine of RT America broadcaster Larry King.

At least 217 individuals were arrested and charged with rioting. The U.S. Attorney’s Office said each offender is facing up to 10 years in prison and a fine of $250,000.

The violence in Washington and cities across the country was organized by fringe-left groups that wield a lot of influence in organizing circles.

And as my colleagues at Dangerous Documentaries, the documentary-making division of Capital Research Center discovered, organizers from two communist groups, the Workers World Party (WWP) and the Freedom Road Socialist Organization (FRSO) were integral to planning DisruptJ20 demonstrations and riots across America during Inauguration Week.

Their research was highlighted in the popular 20-minute documentary, “America Under Siege: Civil War 2017,” which is directed by Judd Saul, and written and narrated by eminent researcher of radicals, Trevor Loudon. It may be viewed for free online at Capital Research Center’s website. At time of writing, the viral hit had been viewed more than 250,000 times on YouTube after being published Thursday at 11 a.m. Eastern time.

WPP First Secretary Larry Holmes, who adores the North Korean dictatorship of Kim Jong-un, vowed in a speech to prevent Trump from being sworn in as president. “Sisters and brothers, we are going to build through massive counter-inaugural protests on Jan. 20. We’re going to shut this down. You know, Trump has started something. We’re gonna finish it.”

WPP youth secretary Ramiro S. Funez boasted in a speech that DisruptJ20 would be “one of the most important political events in modern history.”

WPP youth leader Tom Michalak went to Moscow in 2014 as a guest of the Putin-funded group known as the Antiglobalization Movement of Russia. “The United States government is the greatest enemy of the peoples of the world,” Michalak said.

Another WPP operative, Caleb Maupin, spreads anti-American propaganda as a journalist and political analyst for Iranian government-controlled Press TV and RT America, which is controlled by the Russian government.

“U.S. society born in racism, slavery, and the slaughter of the indigenous people, is now entering a deep political crisis,” Maupin said at the New Horizon Conference in Tehran, Iran, in late 2015.

Losbaker helped organize the rioting at the March 11, 2016 Trump campaign rally at the University of Illinois at Chicago. Leftist violence forced Trump to cancel his appearance at the rally.

This is only the beginning. Get ready for four to eight years of nonstop violent activism and turmoil.