ONE CHART TO RULE THEM ALL: You'll never guess which political party leads in poverty and crime

I'd be more a lot more snarky if the human toll wasn't so devastating. The sad fact remains: progressives don't get it and never will. 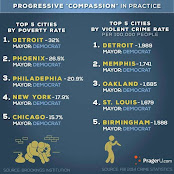 Their policies are based on emotion, not facts. Feelings, not human experience.

Their policies are those of a cult, not a real political party.

Most political parties recognize when, for example, six decades of failure have left some of their primary consitituency groups in ruins.

They never learn because they're incapable of learning.

...over 1,000 public officials and businessmen in Illinois have been convicted of public corruption since 1970, including imprisoned former Illinois governor Rod Blagojevich. In the anti-corruption report, researchers wrote that Chicago’s lawmaking body have been “particularly persistent.” Wait, didn’t our 44th President emerge out of Chicago? Yes, yes, I believe he did. Hmm… 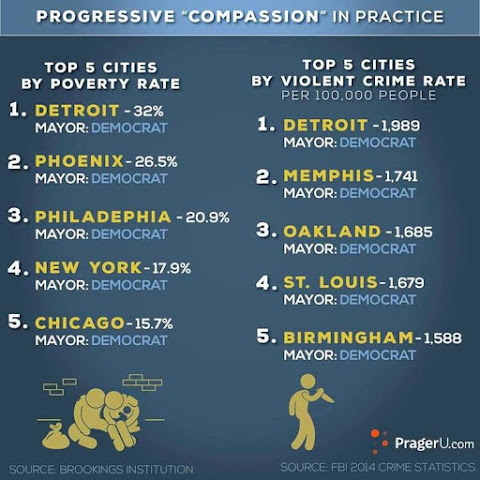 Currently, Blagojevich is still in federal prison, serving a 14-year sentence. He’s hopeful Obama will commute his sentence as he has done for a record number of inmates. After all, it was Obama’s Senate seat, Blagojevich was trying to sell...

...And, what else is happening in Chicago under Democrat rule? Massive taxation, toll booths on every major freeway, yet…their roads are full of potholes, they have insane gun violence, employers are fleeing, there is a pathetic black unemployment rate and they have the highest home foreclosure rate of any major U.S. city.

Deadly becauase real lemmings never control the levers of government, they simply pitch themselves off a cliff.

Democrats, instead, pitch all of us off the cliff. Because their policies can't work, won't work and -- in fact -- have never worked.

RELATED: HOW WE LOST THE WAR ON POVERTY

Come to think of it, Jim Jones had nothing on Barack Obama.

Actually, lemmings don't jump off cliffs-that was a Disney setup. However, dimocrats are dumb enough to do it proving that small rodents are smarter that dimocrats!

Significant correction. The violence in Chicago is not "gun violence." It is gang violence. Using the exhaustive collection of data at heyjackass dot com, clear correlations can be made between certain groups of people and violence. (Illegal) firearm possession is incidental. If guns were removed the gang wars would continue amongst those groups, merely with alternate means of assault.

If the violence were truly "gun" violence, that violence would be much more randomly spread over the demographic horizon, especially within groups that own larger numbers of firearms to begin with.

Democrats view these stats as P R O O F there needs to be more control and regulation
They caused these problems as a means to stay in power because according to them, they are
the ONLY ones that can solve the problem. I feel bad for the the voters that are so easily swayed by trinkets of EBT, SNAP, phones etc. to put up with this BS. Wait, no I don't. I feel bad for the honest, hardworking people that have their money pissed away by these liberal pirates.