The Al Aqsa Martyrs Brigades -- consider them your garden variety insane, misogynistic terrorists -- took credit for a homicide bombing in the Israeli city of Dimona. A pair of homicide bombers killed one woman and wounded 11 others.

Immediately after the attack, a leader of the Al Aqsa Martyrs Brigades terror group [took] credit for the bombing... [providing] names of the two bombers – Mussa Arafat, a PFLP terrorist from the Gaza city of Khan Younis, and Lawai Lawani, an Al Aqsa Brigades member from Gaza's Sabra neighborhood... 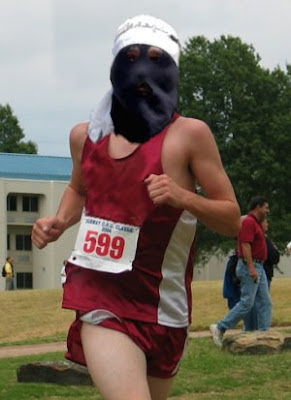 The head of Al Aqsa Public Relations moves on to his next job
The Hamas terror group today claimed responsibility for the suicide attack in text messages to journalists and on Hamas' official TV station. Hamas identified the two attackers as Mohammed Herbawi and Shadi Zghayer...

Israeli security officials realized the Al Aqsa Marytrs Brigades – after hearing of yesterday's successful suicide operation – mistakenly thought it was their bombers who had reached Israel and detonated their explosives and, in a rush to take responsibility, the Brigades released the names of their two bombers...

I wouldn't want to be the head of Public Relations for Al Aqsa. The pink slip reportedly comes in the form of a garrote.
at 8:37 PM
Email ThisBlogThis!Share to TwitterShare to FacebookShare to Pinterest
Labels: extremism, War