...Hillary had to loan herself money. Now, the question is, "Whose is it?" She's getting very testy about this. It's my money! It's my money! She's made about $6 million from her books. Her husband's made the rest of the money in the family, according to the financial disclosure forms and so forth. 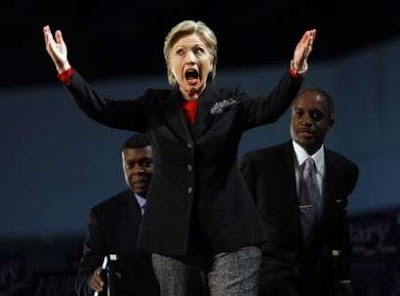 Her staff, including the campaign manager... are now working without pay, and a reporter... asked her today, "Are your unpaid staff members getting health care coverage?" She dodged the question! ...I mean, this has gotta be stunning to these people to get questions like that from the [mainstream media] who they thought they had in the palm of their hands...

What's the emoticon for giggling?
at 7:38 PM
Email ThisBlogThis!Share to TwitterShare to FacebookShare to Pinterest
Labels: Democrats, Hillary, MSM