The Suburban Chicago News describes the effects of "hyper-caffeinated" Shock coffee on consumers.

"I can taste the difference," McBride said as he sipped the high-octane fuel on a subzero day. "It's pretty strong. I figured today I'll give it a shot and see what happens..."

"It gets me going in the morning," Joliet Speedway manager Rich Hale said of Shock Wave. "It has a good taste. It's not real strong."

"That will wake you up," she said as she offered a sample to a groggy reporter. 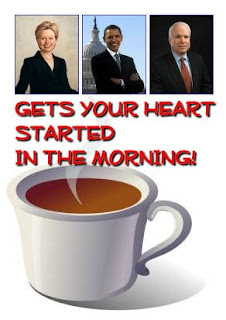 Putting Barack Obama, John McCain or Hillary Clinton -- but I repeat myself -- in the White House would also tend to have this effect.
at 4:02 PM
Email ThisBlogThis!Share to TwitterShare to FacebookShare to Pinterest
Labels: Water-cooler