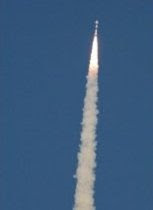 ...The satellite, blasted into orbit from southern India on January 21, is reported by the Israeli press to have the ability to see through clouds, carry out day and night all-weather imaging and will be used to spy on Iran's suspect nuclear programme.

"The Indian government says the issue is a technical and commercial one, but we hope that the matter can be considered from the point of view of protocol," Iran's ambassador to New Delhi, Sayed Mahdi Nabizadeh, told reporters.

"We hope that an independent and wise country like India will not give their space technology to launch any instruments of espionage. Our officials have expressed our point of view," he added... 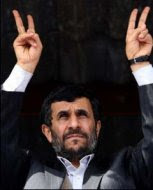 In a televised speech Wednesday from the port city of Bushehr, where Russia delivered the last of the uranium needed to start up Iran's first nuclear power plant, Ahmadinejad told Israel's friends to "stop supporting the Zionists, as [their] regime reached its final stage," according to news reports. "Accept that the life of Zionists will sooner or later come to an end."

"Abandon the filthy Zionist entity which has reached the end of the line... The ones who still support the criminal Zionists should know that the occupiers' days are numbered."

In also completely unrelated news, Iran is poised to attain offensive nuclear capabilities within 36 months, according to Israel's Mossad. 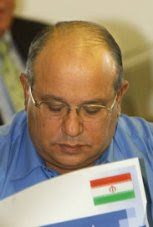 [Iran presents a danger not only due to its] nuclear weapons but also because of its influence on more imminent threats - such as Hamas, Hizbullah and Syria - according to an assessment presented to the Knesset Foreign Affairs and Defense Committee by Mossad head Meir Dagan Monday...

Iran is acting on two tracks, Dagan said, one towards the enrichment of uranium and the other towards manufacturing surface to surface missiles with large payloads... ...Syria and Hizbullah had studied the lessons of the Second Lebanon War and come to the conclusion that they cannot overpower Israel and contend with its far superior firepower. Therefore, he said, they were investing their energies in developing missiles to target the home front, which they had recognized as Israel's weak point.

Rockets and missiles are a more substantial threat than they were in the past," Dagan said. "Syria is upgrading its arsenal of surface to surface missiles, and the number of missiles and rockets it possesses today is twice the amount it had only two years ago..."

Trying to link all of these unrelated stories into a single, consistent thread is very, very difficult. Perhaps that explains why our beloved mainstream media hasn't bothered to explore this storyline.
at 8:04 PM
Email ThisBlogThis!Share to TwitterShare to FacebookShare to Pinterest
Labels: extremism, MSM, War