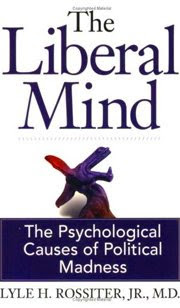 "Based on strikingly irrational beliefs and emotions, modern liberals relentlessly undermine the most important principles on which our freedoms were founded... Like spoiled, angry children, they rebel against the normal responsibilities of adulthood and demand that a parental government meet their needs from cradle to grave."

While political activists on the other side of the spectrum have made similar observations, Rossiter boasts professional credentials and a life virtually free of activism and links to "the vast right-wing conspiracy."

Rossiter says the kind of liberalism being displayed by the two major candidates for the Democratic Party presidential nomination can only be understood as a psychological disorder.

Dr. Rossiter says the liberal agenda preys on weakness and feelings of inferiority in the population by:

* creating and reinforcing perceptions of victimization;
* satisfying infantile claims to entitlement, indulgence and compensation;
* augmenting primitive feelings of envy;
* rejecting the sovereignty of the individual, subordinating him to the will of the government.

"The roots of liberalism – and its associated madness – can be clearly identified by understanding how children develop from infancy to adulthood and how distorted development produces the irrational beliefs of the liberal mind," he says. "When the modern liberal mind whines about imaginary victims, rages against imaginary villains and seeks above all else to run the lives of persons competent to run their own lives, the neurosis of the liberal mind becomes painfully obvious."

Amazon: The Liberal Mind: The Psychological Causes of Political Madness
at 7:05 PM
Email ThisBlogThis!Share to TwitterShare to FacebookShare to Pinterest
Labels: Democrats