Pimping aside, am I allowed to say that the Clintons are playas?

Hillary Rodham Clinton threatened yesterday to pull out of an upcoming debate hosted by MSNBC after one of its correspondents said on air that daughter Chelsea was being "pimped out" by the campaign to win votes... "I, at this point, can't envi sion a scenario where we could continue to engage in debates on that network, given the comments that were made," said Clinton's spokesman, Howard Wolfson, calling the comment "beneath contempt."

Speaking of which, legendary Clinton fundraiser Peter Paul asserts that the Clintons did precisely what David Schuster described in the run-up to Hillary's 2000 Senate campaign. 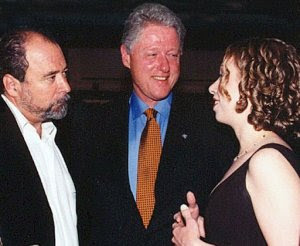 ...Bill Clinton introduced Paul to Chelsea at a welcome reception Paul arranged for the Clinton family when they arrived at the Brentwood Ranch where Paul hired and supervised Grammy’s producer Gary Smith in producing the hard money fundraiser concert for Hillary that was a part of the Gala Hollywood Salute to President Clinton.

Paul even offered Chelsea a job, in tandem with the services her father promised to provide Paul and his company when he left the White House, as a roving reporter for the youth audience of Paul’s company’s global entertainment portal on the internet- stanlee.net. 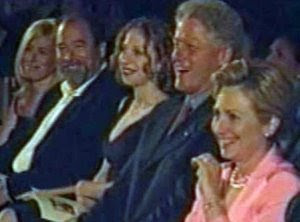 The White House requested that Chelsea be seated between President Clinton and Peter Paul at the Gala Salute to President Clinton. The introduction by Bill of Chelsea to Paul and her conversations about Paul’s family and his one year old daughter featured in the Gala Tribute Book, appeared to be intended to help Hillary establish a “family” rapport with Paul that would assure Paul’s continued financial support of Hillary’s Senate campaign...

I always said Bill Clinton was a playa...

Read all of Paul's post - he has some interesting photos and documents I hadn't seen before.

Linked by: The Anchoress. Thanks!
at 5:52 PM
Email ThisBlogThis!Share to TwitterShare to FacebookShare to Pinterest
Labels: Democrats, Hillary