In a recent court filing, federal prosecutors have again described the Council on American-Islamic Relations (CAIR) as a supporter of terrorism. So why would Tulane University offer a forum to senior CAIR representatives who simply wish to market the organization's propaganda?

Tulane's student newspaper provides some details into the insidious conclave of useful idiots. 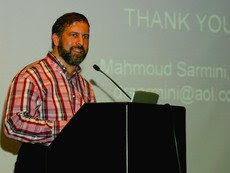 The day-long event hosted a panel of experts, most notably Nadhira Al-Khalili, legal council for the Council on American Islamic Relations (CAIR)... Al-Khalili stated that the levels of Islamophobia have risen...

She advocated for the expediting of naturalization processes for non-violent muslims [sic], which she says should be "less-institutionalized". She also spoke out against the "democratizing" of foreign countries...

Another speaker... was Dr. Mahmoud Sarmini, who explained the concept of jihad and refuted many of its stereotypes. He drew comparisons of terrorism to moments in history including the Crusades, the Spanish Inquisition, the Irish Republican Army and Timothy McVeigh. He compared muslim [sic] suicide bombers to Baruch Goldstein, an America-born Israeli who perpetrated the 1994 Cave of the Patriarchs Massacre in which 29 people were killed when he opened fire into a crowd of Muslim worshippers with an assault rifle. [Ed: for those keeping score after 9/11, Islamic extremists attacks on innocent civilians - 10615, Christian and Jewish attacks on innocent civilians - 2]

..."We do not have a monopoly on the business of terrorism," Sarmini said. "Jihad is not terrorism and terrorism is not jihad... Do not believe all of what you see and only half of what you hear..." 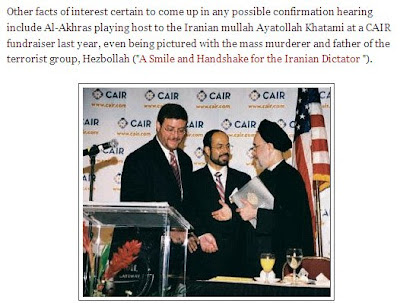 Al-Khalili called upon people to learn more about Islam on a more personal level. "This is something we should do on a more day-to-day basis," Al-Khalili said.

Masquelier agrees but said it is more complicated. "It's a really complex issue but there is a way in which certain representations appeal to a certain public at a particular time," Masquelier said. "There has been a political analysis that the West and Islam are on a collision course. All of those fears we have of the Muslim world feed into our fears. Then 9/11 happened and that kind of solidified these fears." [Ed: an attack initiated in the pursuit of religious glory (i.e., Jihad) that killed 3,000 innocents would tend to do that]

Of course, anyone paying attention would recall that CAIR was named an inundicted co-conspirator in a Hamas terror-fundraising case last year. And that its leadership, for years, has been linked to the pursuit of an extremist agenda.

...FBI wiretaps revealed that CAIR's founder, Omar Ahmad, and executive director, Nihad Awad... attended a secret meeting in Philadelphia with Hamas leaders and other terrorist sympathizers... In fact, Ahmad himself was named an unindicted co-conspirator in the terror case, which counts a CAIR founding director among its criminal defendants.

But now, in a separate case involving a senior CAIR official who trained to kill American soldiers in jihad, prosecutors are tying CAIR even closer to terror. In court papers filed in December, federal prosecutors described CAIR as not just an apologist or sympathizer, but a supporter of terrorists.

Perhaps someone could alert the useful idiots at Tulane that a more reasonable group to advocate for Muslims might be Muslims against Sharia and not the unindicted co-conspirators known as CAIR.
at 9:27 AM
Email ThisBlogThis!Share to TwitterShare to FacebookShare to Pinterest
Labels: Democrats, extremism, Whackademia