Did the Clinton campaign release pictures of Obama in Somali Muslim Garb?


US News & World Report implies that the Clintons may have been behind the controversial photo of Obama wearing Somali Muslim clothing during his 2006 visit to Kenya. 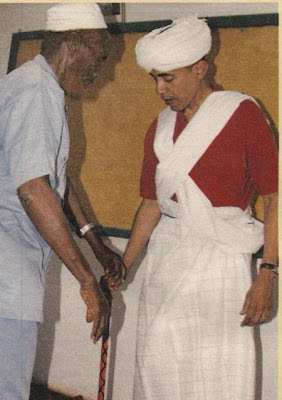 An internet posting of a simple photo of Sen. Barack Obama today became the best example yet of how the Democratic presidential campaign has turned into a nasty and bitter fight as Sen. Hillary Clinton sinks from the inevitable nominee to an also-ran. It all started early today when the Drudge Report posted the picture of Obama in a tunic and turban while visiting Wajir, a rural area in northeastern Kenya in 2006. It was standard stuff, apparently, as visiting dignitaries typically try on the local garb, our friend Lynn Sweet of the Chicago Sun-Times reports. Matt Drudge wrote that the photo was being circulated by Clinton staffers in an apparent attempt at fear-mongering. Said his sources: "Wouldn't we be seeing this on the cover of every magazine if it were HRC?" the standard reference to Clinton...