January 20, 2017 was inauguration day for President Donald Trump and the last day on the job for national security advisor Susan Rice. At 12:15 p.m. that day, Rice sent herself an email about a January 5 meeting with POTUS 44, FBI boss James Comey, deputy attorney general Sally Yates, and vice president Joe Biden.

In this meeting, Rice wrote, “The president stressed that he is not asking about, initiating or instructing anything from a law enforcement perspective. He reiterated that our law enforcement team needs to proceed as it normally would by the book.” From a national security perspective, however, the president “said he wants to be sure that, as we engage with the incoming team, we are mindful to ascertain if there is any reason that we cannot share information fully as it relates to Russia.”

Senators Lindsey Graham and Charles Grassley, among others, found the email highly unusual. Former White House counsel Kathryn Ruemmler countered that Rice was simply “memorializing an important discussion for the record.” The discussion did not involve the Steele dossier and “any insinuation that Ambassador Rice’s actions in this matter were inappropriate is yet another attempt to distract and deflect from the importance of the ongoing investigations into Russian meddling in America’s democracy.” Others offered a different explanation for Rice’s eleventh-hour message. 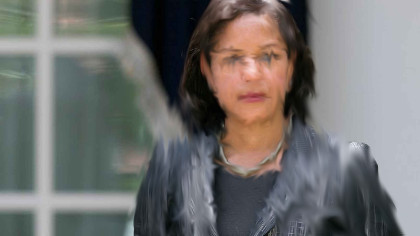 “She’s obviously trying to rewrite history,” Judge Andrew Napolitano told Fox News. “She’s trying to make it look as if something happened that didn’t happen.” Those present “learned something between January 5th and January 20th which caused them to want to change the narrative about this meeting.”

As the FBI’s Trump-hating Peter Strzok and Lisa Page said in their texts, “potus wants to know everything we are doing,” in their various investigative capers during 2016. Those doubtless concerned the “insurance policy,” the lovebirds discussed in the office of Clinton crony Andrew McCabe, deputy director of the FBI. So perhaps that was the narrative Susan Rice wanted to change on January 20, 2017. With her proven experience, she was the right woman for the job.

On September 11, 2012, Islamic terrorists attacked the U.S. compound in Benghazi, killing Ambassador Christopher Stevens, information officer Sean Smith, and former Navy SEALs Glen Doherty and Tyrone Woods. Secretary of State Hillary Clinton knew it was a planned terrorist attack but told the world it was all part of a spontaneous protest over an internet video. Susan Rice, then U.S. Ambassador to the United Nations, dutifully echoed that narrative on national television.

As national security advisor, Rice spun the narrative that turncoat Bowe Bergdahl served the United States with “honor and distinction.” As Rice told CNN, “I’m upfront with the American people and I always do my best on behalf of my country and I do my best to tell the facts as I know them.”

On the Benghazi episode, Rice said she provided the “best information” the government had at the time. “I regret that the information I was provided was wrong, that I delivered to the American people,” she explained. “That doesn’t make me a liar. That makes me a public servant trying to say what we knew at the time.”

As Shirley MacLaine said in Being There, “I reveal myself to myself, and I am drenched and purged.” To the nation, on the other hand, Rice revealed herself as a professional liar, though not particularly convincing. As it happens, her January 20, 2017 attempt to retrofit POTUS 44 as a by-the-book champion of propriety is part of a long tradition.

In the 1995 Dreams from My Father, strategic information always comes from the ladies. At the prestigious Punahou School, teacher Miss Hefty says, “Barry Obama’s father is here, and he’s come all the way from Kenya, in Africa, to tell us all about his country.” Aunt Jane calls from Nairobi to explain: “Listen Barry, your father is dead. He is killed in a car accident.”

Auma, the Kenyan Barack Obama’s daughter, shows up in Chicago. “You know, the Old Man used to talk about you so much!” Auma tells the American. “He would show off your picture to everybody and tell us how well you were doing in school.”

In his massive Rising Star: The Making of Barack Obama, Pulitzer Prize-winner David Garrow explains that Dreams from My Father was not a memoir or autobiography. “It was instead, in multitudinous ways, without any question, a work of historical fiction.” (Garrow’s italics) And “its most important composite character was the narrator himself.”

With collaboration from the establishment media, that composite character became the 44th president of the United States, the most powerful man in the world, for eight full years. Since he left office, evidence has been mounting that POTUS 44 corrupted the FBI and DOJ to ensure the election of his chosen successor. When Hillary Clinton lost, the president tasked FBI and DOJ bosses to frame Donald Trump on charges that he colluded with Russia.

POTUS 44, James Comey, Sally Yates and the whole Deep State squad weren’t exactly acting “by the book.” As Judge Napolitano said, Susan Rice is “obviously trying to rewrite history.” The American people should see it as another backward masking of a president who, unlike all the others, wasn’t exactly who he claimed to be.

I often wondered how the Germans were duped by Hitler or the Russians by Lenin. Now I know. But I have to admit, I didn't realize how gullible, ignorant and naive Americans are. The Kenyan worked with others of evil intent to destroy this country without any real objection.


What does this bimbo how a Doctorate in? Everything she attempts to get away with, she gets caught at. She has to be one of the dumbest people ever.

Now if only the repubic's can get their act together and prosecute these bastards.