BERLIN, GERMANY - Eva Braun's charm and beauty stand out in the Munich games. Everywhere she goes, she is attended by mobs of admiring and curious reporters. Photographers jostle against each other, eager to get a shot of Eva's sphinx like smile or get a picture that does justice to her cleverly subdued use of makeup or simple yet sophisticated hair style.

Normally, Eva lives her life in Hitler's shadow, but today she stands out as Germany's perfect emissary of peace for our time and hope for the future. "She shows Hitler's softer side," said one reporter. "People may be too focused on Hitler's bold speeches, or his military buildup violating the controversial Treaty of Versailles, but Eva shows us he's warm and very human, too."

In stark and disappointing contrast was the American delegation with its overbearing patriotism and "win at all costs" attitude that does so much to cheapen the Olympic spirit.

Other delegations, in fact, all of them, had the respect and common courtesy to lower their flags before Hitler in the opening ceremony. Only America in its awkward obsession with honoring the flag refused to respect Hitler in the accustomed way. 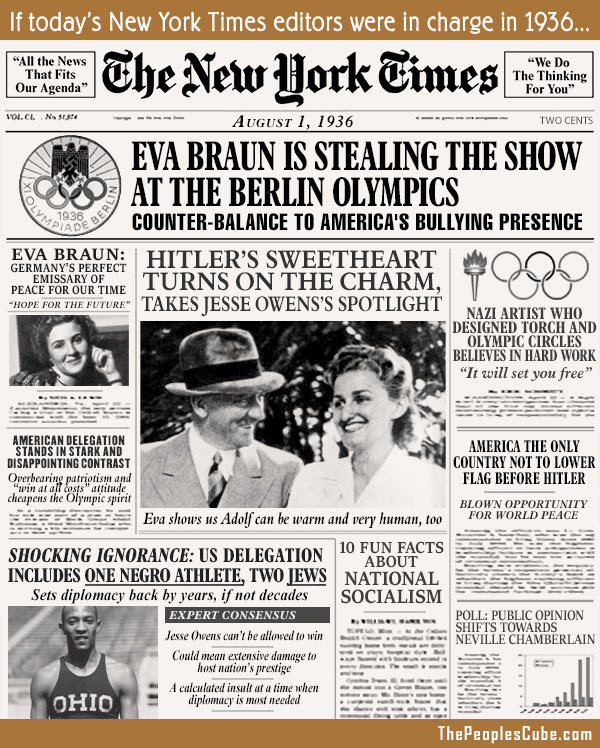 "It's frankly an aggressive and disturbing 'in your face' display of nationalism on our part," said Harvard professor, Walter Guntz, a specialist in German affairs. "This was a completely blown opportunity for world peace. The rudeness shown to Hitler, their host, is a serious affront to German pride, and I'm sorry, having the American athletes remove their hats just isn't the same thing. With the possibility of escalating tensions in Europe, this is the last thing we need. Thankfully, Britain may vote for a sensible prime minister who just might find a way to avoid plunging us into another world war," Guntz said.

As if that wasn't bad enough, the US delegation includes at least one Negro athlete, the track and field star Jesse Owens.

"Roosevelt could not have delivered a more calculated insult at a time when diplomacy is most needed," said another reporter who has been covering Germany's astonishing economic recovery. "Germany is very sensitive about their self-image right now having been humiliated in the Great War. While Hitler is trying to instill some pride into the German people, our president sends this colored athlete who happens to be very good. If he wins, it will do extensive damage to Germany's prestige, and could set diplomacy back by years, if not decades," he added.

But still, there is hope. Hope that Eva Braun's charm offensive will give some counter-balance to America's bullying presence as a nation that forgets itself as a guest of an ancient and otherwise respected people.

Doug, I don't know how you find this stuff, but I always look forward to it. The New York Times hasn't changed one bit, except they only "think" the word "Negro" when they talk about the Blacks.
Think I'll Make a YOuTube video on this one.
Thanks for the Inspiration.

Olympics is the best tournament that include various famous Sports. I like your blog.