So I was listening to NPR while driving today (keep your friends close and your enemies closer).

The show was called "1A", hosted by Joshua Johnson, and I listen to it on a semi-regular basis. Johnson is an intelligent guy, but infected with the conventional Beltway mindset: any policy Republicans are for == bad. Anything Democrats do == good.

I encourage you to listen once in a while to gather intel on Democrat-Media talking points. I also discourage you from contributing to any public broadcasting effort until such time that they offer equal represention of both conservative and liberal viewpoints. And as far as taxpayers funding this one-sided tripe? I say no. We have The New York Times and Daily Kos for this kind of "reporting".

In any event, today's 1A featured another in a long series of Trump-bashing exercises, this time regarding the first of what will prove to be many, many memos on unlawful activities conducted by the Obama administration.

The guests were, of course, focused on Trump "obstructing justice" into investigations of "Russian collusion" (no matter that we have yet to see a single piece of evidence that such collusion ever occcurred). The guests carefully ignored the primary points of the memo, which were plainly obvious to anyone not infected with Trump Derangement Syndrome (TDS). 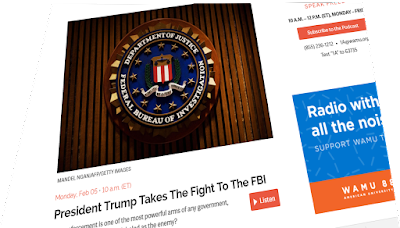 I wrote Johnson as follows:

Joshua, I enjoy the show, but am truly disappointed in your coverage of the FISA memo. Your guests omitted key, material facts from the discussion including:

1. In 2016, NSA director Mike Rogers requested an audit of possible abuses of warrants submitted to the FISA Court (FISC). He cited numerous cases where U.S. persons were illegally surveilled and raw intelligence shared with private contractors. The result of the audit, a 99-page document [PDF], is shocking on its own. In the April 2017 ruling, the FISA Court (FISC) noted a significant “compliance error rate” as far back as 2012 (page 82); in essence, the abuse of FISA searches by FBI contractors was systemic over multiple years. This is a completely separate scandal from the one outlined by the Nunes memo, yet wholly consistent with abuses by the Obama administration.

2. The DOJ inspector general was stonewalled from investigating FISA abuses by the DOJ's National Security Division (NSD). In 2015, the IG requested oversight and... wait for it... Sally Yates responded with a 58-page legal explanation [PDF] saying, in essence, "F-off. All of the DOJ is subject to oversight, except the NSD."

This was a pattern under Barack Obama. In fact, stonewalling of inspectors general during the Obama administration era became so oppressive that every inspector general signed a complaint to Congress in 2014 (link) [PDF}. The DOJ IG report will likely be released in March and is said to detail a pattern of weaponization of FISA against as many as 1,000 GOP-linked individuals.

3. Further, the pattern of weaponizing government agencies is far from a one-off during the Obama years; those responsible for the IRS scandal have never been held to account.

I recommend that -- if you are truly looking for a complete, fact-based discussion of these issues -- you seek an interview with former federal prosecutor and special counsel Joe DiGenova, who has predicted every facet of this investigation thus far.

He gave a fascinating interview on the topic here, which will help give you a much more comprehensive background on this very real scandal. That is, if you do care about stopping police state tactics by administrations, whether Democrat or Republican.

p.s., I have published an exhaustive timeline of these issues, with source links and attributions fully documented here. I believe anyone concerned with civil liberties has cause for concern.

Thank you for insightful information on this just begun issue with much more dynamite information to follow. You put many things in the sunshine I had not heard yet or been exposed to. Aloha.

The worst is Marketplace, which arguably should be the most sensible show on NPR. Their reaction to the tax cuts was that the proletariat would just spend the tax cut money on lottery tickets and beer.

I do try to listen to NPR on the radio. I usually only about 30 seconds. I never knew it was possible to tell 100 lies in 30 seconds.

NPR is very biased and disrespectful to conservatives and our POTUS.
Regular audible chuckles and snickering heard when talking re Trump.
Defund!

Being an old geek, I was amused by your use of "==" as an assertion operator. One of my former colleagues used = where he meant == and the result, of course, was not as intended. He asked me, somewhat exasperated, when it was correct to use == instead of equal. In my best geek condescension, my response: When it is both syntactically and semantically correct. Sorry about the geek humor.