While Politico got credit for the story, it turns out it was Andrew Stiles at Washington Free Beacon who broke the original scoop. 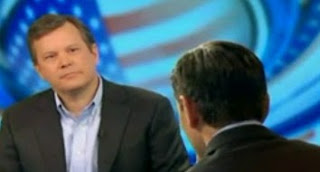 ABC News chief anchor George Stephanopoulos donated $50,000 to the Clinton Foundation in recent years, records show. The contribution is publicly available information, but the host had not previously disclosed it to ABC viewers, despite taking part in on-air discussions about the Clinton Foundation and its controversial relationship with foreign donors.

...Stephanopoulos’s recent coverage of the topic has been challenged by critics who question his objectivity as a longtime Clinton aide. The host’s April 26 interview with Clinton Cash author Peter Schweizer, for example, elicited partisan reactions after Stephanopoulos repeatedly pressed the Schweizer to acknowledge the lack of a “smoking gun” among the allegations in his book...

Conservative commentators, meanwhile, complained about Stephanopoulos’s “aggressively” dismissive questioning, and took issue with a former Clinton operative asking Schweizer, a former speechwriter for George W. Bush, about his “partisan interest” in writing Clinton Cash ... ABC News viewers should have also been reminded of the host’s connection to the Clintons, the politicians at the center of the discussion.

Story Summary: When Peter Schweizer appeared on “This Week” on April 26th to promote his new book about the Clintons, he got a skeptical grilling from host George Stephanopoulos. One subject that wasn’t raised? The fact that Stephanopoulous has personally contributed $50,000 to the Clinton Foundation.

Stephanopoulos is not a reporter or a journalist. He is a partisan operative, a political hitman, and a conniving worm who has no business working for a real media outlet.

Which is why he works for ABC News.

Sen. Mike Lee (R-UT), one of the most brilliant men in Congress, was quick to react. He stated that he would not appear on ABC until the Clinton crony recused himself from all political coverage.

Shortly thereafter, the Clinton toadie tweeted that he would not moderate any GOP debates in 2016.

Andrew Stiles, who broke the original story, has an important follow-up question for the disgraceful hack:

Stephanopoulos obviously did not disclose his donations at the time, but if we are to judge him according to his own words, it’s worth asking: What was he hoping to achieve by making those donations?