This is the kind of thing that should make you nauseous. 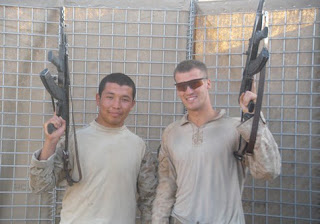 An Afghan interpreter for the United States military who had been waiting for over four years on the U.S. visa list was tortured and killed by insurgents earlier this year, raising concerns that other translators could meet a similar fate as American forces withdraw from Afghanistan.

Sakhidad Afghan worked as a translator for the U.S. Marines and Air Force since around 2008. Four years ago, he applied for a U.S. visa under a program for at-risk military translators. He was still on the waiting list when the Taliban reportedly kidnapped him from a bazaar this spring and executed him in the back of a trailer truck.

Each year, thousands of Afghan interpreters under threat from anti-American militants sit in bureaucratic limbo, waiting for visas they were promised by the U.S. military.

Contrast the disgusting treatment of our allies with the administration's handling of violent illegal aliens.

Back in 2013, Immigration and Customs Enforcement got ripped by Congress for releasing 36,000 violent criminal illegal aliens onto American streets. Those criminals had convictions of homicide, rape, child molestation drunk driving and more.

...Now, the agency has done it again and released more than 30,000 of the same type of criminal alien onto American streets last year ... "ICE released 30,558 criminal aliens in fiscal year 2014, which is down from the 36,007 criminals released a year before ... ICE didn’t release a breakdown of criminal offenses of the new 30,000 on Wednesday, but among the 36,000 released in 2013 were 193 homicide convictions, 426 sexual assault convictions, 303 kidnapping convictions and 16,070 convictions for driving under the influence of drugs or alcohol...

This kind of behavior is the entire Obama administration in microcosm.