Does it strike anyone as strange that the only candidate for the Democratic Party’s nomination to be the next President of the United States is the wife of a former President? There is no historic precedent for this, no way to measure this against how Americans have selected Presidents in the past. 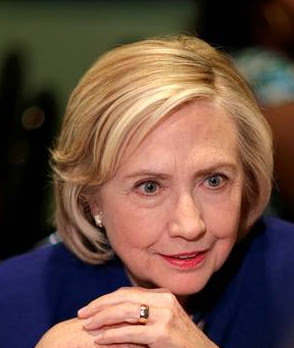 Like most Americans, I first took notice of her when Bill began his campaign to become President. I recall being struck by the fact that in 1969 as a student at Wellesley College, her 92-page senior thesis was devoted to the community organizer, Saul Alinsky’s book. The title of the thesis was “There is Only the Fight…”: An Analysis of the Alinski Model.” She would request Wellesley to deny access to it.

Alinsky was a Communist. His twelve rules for radicals, unlike the Ten Commandments, are devoid of a moral message. Instead, the message is “this is how you can win.” Hillary would do well to review Rule 7, “A tactic that drags on too long becomes a drag.” She was already old news when she announced her candidacy and it is becoming older with every passing day as she fails to take questions from the media, participating in totally staged events to look like “one of the people.”

Neither She or Bill are "one of the people". They, like the Bushes, are political royalty. They have both been around a very, very long time.

Hillary, despite the millions of words that have been written about and by her, remains an enigma. Other than being farther to the Left than Bill, she is a woman whose “achievements” in life have largely been the result of having married Bill. She would spend eight years in the White House as the First Lady and, pursuing her college dreams of political power, they would move to New York State where she ran and won a Senatorial election.

There isn’t a single Senate bill that she introduced or that is credited to her. She is said to have worked hard and gotten along well with her colleagues, but her Senate years are a blur in her public life. Then she made a bid to be the Democratic Party’s presidential candidate in 2008 and along came Barack Hussein Obama with whom the voters fell in love. When he was elected, he asked her to become his Secretary of State.

With the exception of the Benghazi tragedy on September 11, 2012, a clear failure of judgment and duty, and about which she lied, her years as Secretary of State reflect her years in the Senate; nothing of any significance resulted, no major treaties, no major anything, except for one more scandal.

So the question remains; who is Hillary Rodham Clinton? What are her fundamental principles beyond the acquisition of political power? And money. Lots of it while uttering nonsense such as she and Bill being “dead broke” when they left office?

What are we to make of her deletions of thousands of emails on her private server—something she was not supposed to use as Secretary of State—and her assertion that those we may never see were of no importance? They’re important if, as is widely believed, foreign governments hacked her private email server and thus had access to information about policies affecting themselves and others. She may not have broken a law, but she surely did not obey Obama White House policy regarding the emails.

Alinsky’s Rule 1 is “Power is not only what you have, but what the enemy thinks you have. Power is derived from two main sources—money and people.”

We are told that Hillary has a huge amount of money with which to wage a campaign to become the first woman President. In light of the revelations about the Clinton Foundations, virtual slush funds, and the millions earned by her and Bill to give speeches, there is little doubt of that.

You cannot, however, buy trust and the polls indicate that is seeping away.

Her die-hard supporters probably know as little about her as the rest of us, but it is their trust she is depending on right now. Should she actually receive the Democratic Party’s nomination, the distrust of independent voters, disaffected Democrats, and of course Republicans, will play a crucial role in who is elected in 2016. It is not likely to be Hillary Clinton.

It is not likely because, as we have already seen, she seems to have reached a point where her political abilities have grown tired and out-of-date. These are not the 1990s. A whole generation has been born since Bill was President.

Like her, the Democratic Party seems tired as well. Can you believe there is not another Democrat, a Governor or Senator who could emerge to represent the Party? How devoid of any real leadership has the Democratic Party become if the only candidate they can offer is a former First Lady? That has been her primary claim to fame despite the two offices she has held since the 1990s.

I suggest that Hillary ceases to be an enigma if you just think of the Wellesley student who thought the best topic for her senior thesis was the book by a dedicated Communist, Saul Alinsky.

Alan Caruba will be in the hospital for a procedure for a few days. Please consider donating on his site as a show of support for his prolific defense of America.

And how did this differ from Obama and yet he won. Probably with less money than she commands.

"Alinsky was a Communist"

He was, but he was also intimate with organized crime. He said he revered Frank Nitti. I think his ties with the mob, and Hillary's adulation of him, are every bit as telling as his ties with Communists. Yet, this angle is seldom cited.

Anonymous,at this point,what difference does it make how urkel won?