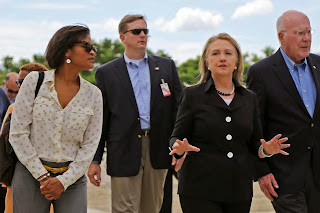 As a writer for the American Thinker website (Nov. 2007 through Jan. 2015) I tried to get a clear response from the Department of State concerning roughly $6 billion of department funds that were not thoroughly accounted for during Mrs. Clinton’s tenure there. It was an exercise in futility that I documented in the article entitled "State Department won't say how missing records for $6 billion were stored", dated 25 September 2014.

Legacy media, including the Wall Street Journal, reported the story initially, but soon moved on (e.g., "State Department can't account for $6 billion in last 6 years")
.
Mrs. Clinton’s tenure at State was also cited in two other "Management Alerts" issued by the Office of Inspector General (OIG). The three OIG Alerts were catalogued in my article entitled "Hillary's reputation for competence as Secretary of State erodes from within", dated 12 October 2014.

You, Ms. Meckler, are on the cusp of a significant story. Question is: Will you pursue it? I’m an old grandfather and have retired. Time for your generation and the Wall Street Journal to hold the D.C. scammers accountable. If not your generation, then who?

Where did all that money go? This needs immediate investigation and not be allowed to get swept under the rug.

GOOD LORD these people are lying crooks. And, WE THE PEOPLE are funding their corruption. It's INSANE.