That's my headline for the following article spotted at DMnews; their headline is the less accurate "Postal Workers to March for Expanded Hours, Services." 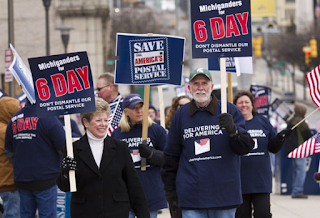 Members of the American Postal Workers Union will hold rallies in more than 85 cities this Thursday in a “National Day of Action” to call for expanded hours and the offering of new services such as banking to preserve jobs.

“U.S. Postal Service executives and the agency's board of governors are using a manufactured financial crisis to justify their strategy of reducing service, delaying mail delivery, and dismantling a great national treasure,” said APWU President Mark Dimondstein in announcing the planned demonstrations. “Postal workers are fighting for a vibrant, public Postal Service that expands hours, offers new services, and gives quality service to people across the country.”

Pity no one told these budding rocket scientists that barring the invention of a time machine, followed by a sharp reversal of time -- say, back to the pre-Internet era of 1960 -- nothing is going to bring people back to the Post Office.

And that's ignoring the basic issue of its finances, which is no concern for Democrats, I know, but taxpayers are worried.

That's because the Post Office has lost more than $47 billion in the past decade. As Tyler Durden asks:

...why doesn't this bloated, anachronistic, money-losing zombie just go away and make way for the far more efficient and nimble private sector? After all, there are countless companies which could step in and do what the USPS does for a fraction of the cost?

Or, as they are better known in D.C., voters.

Actually, I'm going to have to correct Tyler on one point. It's not the number of voters that D.C. fears; the elites piss off millions of voters all the time (e.g., open borders and illegal immigration). No, they fear the public sector unions that fund the Democrat Party.