Yesterday, Barack Obama played golf, on the same day that 400 women and children and hundreds of troops were slaughtered in Palmyra. Today he’s yucking it up with reporters and eating ice cream while a British Lord is calling out for action, saying “we can no longer rule out boots on the ground.”

He has not a care in the world.

According to Reuters, opposition activists on social media claimed that hundreds of bodies were in the streets of the city.

“The terrorists have killed more than 400 people.. and mutilated their bodies, under the pretext that they cooperated with the government and did not follow orders,” a Palmyra resident told Syria’s state news agency.

State employees were among hundreds killed in the massacre. Among them was the head of of nursing department at the hospital and all her family.

More than 300 troops have been killed and a much larger number have disappeared.

People are being set afire in the streets.

Palmyra is the home of an ancient Roman city 2200 years old and can be dated back to 4000 BC. ISIS will destroy and sell all of Palmyra before they are done.

ISIS is becoming a very serious threat in Libya, the country Barack Obama and Hillary Clinton helped destroy and for which he receives no blame whatsoever. 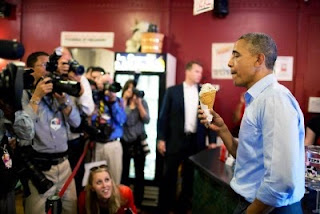 Obama bombed Ghaddafi out of existence and then wouldn’t even provide training to the military and police of the puppet government he put in place. It’s now a disunited state of non-cohesive forces that the U.N., not the U.S., is trying to unite.

Bernadino Leon, the U.N. mediator, told a regional conference of the World Economic Forum that ISIS is becoming “a very serious threat for the Libyans” and the international community if they don’t form a unity government.

ISIS has promised to use Libya as a base from which to send ISIS fighters intermingled with refugees. They’ve promised to kill the pope and take over Rome.

ISIS or IS “has a strong capacity in Tripoli” and a significant presence in Sirte, the birthplace of the late Libyan dictator Moammar Gadhafi.

Where is this 60-member coalition that is supposed to be helping us? Where are they? There is no coalition because there is no leadership, that’s where it is. We would see a coalition if Obama and the U.S. would lead. Palmyra is only the latest tragedy. There are many more to come.

GDFN Islam - the most despicable ideology ever. They rape and destroy and torture just for the hell of it. They exist to hate and kill. Then they fight and kill each other with the same hatred.

Obama the most useless president in American history... with the useless House Senate rino leaders right behind