CRIME RATES AND GUN BANS: The Professor is Lying Through His Teeth

The wrong question is being asked here. 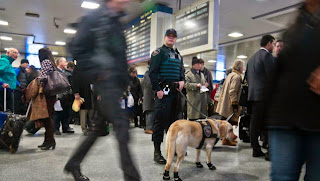 In the past few years, Americans have witnessed shootings at a movie in Colorado, a 3-year-old shooting and killing his father in Indiana and, most recently, nine people killed in a fight among biker gangs in Waco.

Amazingly, Americans seem to see these regular incidents as normal. It’s a powerful and sad testament to how anesthetized we have become to this ongoing violence. And despite all of this violence and loss of life, many in Texas and elsewhere want to increase gun ownership and allow people to openly carry firearms.

Since 9/11, Americans have been deeply concerned about threats to national security. Our tendency has been to define national security only in terms of external threats. A much better way is to see national security is in terms of the well-being of our population. If we think of it this way, the evidence is clear — a heavily armed population in the U.S. is not secure because our culture does not seem to lend itself well to allowing the proliferation of guns.

The premise is that there is some magic that will attach if we "strictly regulate" (or even prohibit) private ownership of firearms.

The facts say otherwise, in fact, they say the exact opposite.

The violent crime rate has fallen nearly in half from 1992 to 2011 according to the FBI and it has continued to fall; 2013, the last year for which full data is available, saw further declines.

Further, property crime also dropped dramatically; motor vehicle theft, as an example, is down by nearly two thirds and burglary rates are down some 40%.

This dramatic decrease in crime rates come during what has been a reversal of gun bans and restrictions that arguably reached its zenith with the Gun Control Act of 1968.

In other words, the professor is lying through his teeth and, I suspect, he knows it.

But let's look at this from a more-philosophical basis, shall we?

Exactly why would you elect or trust any government official who is worried about you being armed?

Think about this for a minute.  If you go "nuts" and start shooting people in any other than a legitimate self-defense situation your life as a free individual is over and there is a damn good chance, in fact majority odds, that you're simply going to be dead within minutes.

What this means, of course, is that if you choose to undertake such an act you are spending your life (in the very literal sense) for whatever you believe in at that moment.

The question to ask is this: Why would you want or permit any government official at any level to have any power over you who does not labor under the certain knowledge that should they do something sufficiently heinous you may elect to spend your life in an attempt to either stop or redress that act?

Further, why shouldn't a professor also understand and agree with this, or for that matter, anyone with a great degree of power over others, including major corporate executives?

It's obvious, isn't it?  All of these people want to have power over you as an ordinary citizen and they're quite-aware that should you have the ability to redress grievous injury on your own, fully aware that doing so is your last act as a sane free man or woman, that is the most-powerful deterrent available against said heinous acts.

In fact it is the only deterrent against such heinous acts that nobody can corrupt.

Witness today's world where big bank executives and traders rip off tens or even hundreds of billions of dollars and nobody goes to prison for doing it.  Or where you're forced to participate in monopoly practices by "laws" that intentionally impoverish you.  Or where your purchasing power is intentionally destroyed by deficit spending with a wink and a nod exactly as if you had a quarter of all your wealth stolen from you in just a few short years.  Your state legislators have bills written for them by lobbyists who actually vote on them and, when journalists catch them at it they are escorted out at gunpoint by armed guards -- who are in fact off-duty cops!  Or, for that matter, where you're told you can't grow your own wheat on your own land for your own family because it "might" impact interstate commerce as you wouldn't need to buy bread.  Or, if you prefer, cops throwing a grenade into a crib and then claiming in a court of law that the baby was at fault for the resulting injuries because it "didn't move" and was present there despite the fact that the person they were seeking was not in the house!

What harnesses such acts and deters them?  Not "law", as the alleged law is simply ignored when it suits certain people with power in both the political and corporate spheres of influence. If you've learned nothing since 2007 you certainly should have learned that when it comes to rich and powerful people, including but not limited to politicians, banksters, other corporate entities and even cops, they appear to rob with impunity and, it appears, in some cases they even rape, maim and murder with impunity too.

I do not presume to know where the line is for any particular person when it comes to spending one's life in redress of grievance. That decision is both deeply personal and given its finality and severity should not be joked about in any way; it certainly isn't funny at all.

What I do know is that there is no present-day argument for a collective decision to take such an action in this country, as no such act has taken place in the United States since 1776 in a winning sense, and not at all since 1865.

But this much is certain: The Framers were quite convinced that had there been a Second Amendment that was studiously adhered to in 1774 the events of 1775 and 1776 would have never occurred as they would have never been necessary.

A very cogent argument exists that the Gun Control Act of 1968, the National Firearms Act of 1934 and the roughly 10,000 laws related to firearms at a federal level passed between 1934 and today have been undertaken not with an honest attempt to address "crime" as the statistics show quite-clearly that as firearms regulations ratcheted upward so did crime and as they have have loosened over the last 15 years crime rates have dropped dramatically.  While the first few of these laws might have been reasonably targeted at such behavior it flies in the face of logic to continue down a path that is producing the opposite of the expected and desired results.

Further, a criminal could care less about what the law says (that's why they're called criminals!) and an insane person is incapable of reasoning rationally and thus cannot comply with the law.  Gun laws thus deter neither of those categories of individuals from their heinous acts; indeed to the contrary by reducing the probability of sane, ordinary citizens stopping them they actually increase the risk of violent assaults by both criminals and the insane.

These 10,000+ laws do and have limited or remove not only your ability to defend against random violent assault by criminals but they also serve to limit or remove your option, in the gravest extreme, to spend your life in redress of a serious grievance by people who grossly abuse power either delegated to or arrogated by them.

Government simply does not exist with the consent of the governed absent this ultimate check and balance.

That, I assert, was what the Framers both recognized and codified in the Second Amendment, and it is for that reason it exists.  Further, we must reinforce and return to the foundation of the Second Amendment on a personal and widespread level because so long as recognition of that fundamental right exists both in theory and practice as written, not as some would seek to twist and even destroy it, I believe that we will never need to exercise it except to deter or stop a random criminal act rather than a collective, systemic one.

This is not a comfortable process of thought to undertake, but it is, in my view, an essential one, particularly as we remember, on this Memorial Day, those who have given their lives in the gravest extreme attempting to prevent the exact same sort of systemic heinous acts by government -- and sometimes private -- action in foreign lands from going unaddressed.