Via Mark Steyn, we arrive at a new set of revelations by Peter Schweizer regarding phony journalist George Stephanopoulos. You may recall that former Clinton operative and current Clinton operative-cum-ABC News employee recently interviewed Schweizer regarding his recent bestseller. Or, rather, he grilled Schweizer over the author's brutal evidence that the Clinton Global Graft Foundation appeared explicitly designed to extract government favors in exchange for massive payoffs.

Schweizer's evidence is overwhelming and, rather than acting like a real journalist, Stephanopoulos instead conducted an interrogation rather than an interview -- never disclosing that he had multiple, deep, and devastating conflicts of interest. It wasn't just that the "newsman" had donated $75,000 to the Clinton Global Grift Initiative: 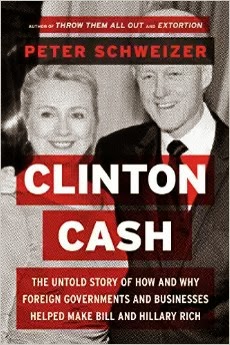 For example, in his on air apology for this ethical mess, Stephanopoulos did not disclose that in 2006 he was a featured attendee and panel moderator at the annual meeting of the Clinton Global Initiative (CGI).

He did not disclose that in 2007, he was a featured attendee at the CGI annual meeting, a gathering also attended by several individuals I report on in Clinton Cash, including mega Clinton Foundation donors Lucas Lundin, Frank Giustra, Frank Holmes, and Carlos Slim — individuals whose involvement with the Clintons I assumed he had invited me on his program to discuss.

Stephanopoulos did not disclose that he was a 2008 panelist at the CGI annual meeting which, once again, featured individuals I report on in the book, such as billionaire Clinton Foundation foreign donor Denis O'Brien.

Stephanopoulos did not disclose that in 2013 and 2014, he and Chelsea Clinton served as CGI contest judges for awards, in part, underwritten by Laureate International Universities — a for-profit education company I report on in the book. Bill Clinton was on its payroll until his recent resignation.

And all in a day's work for today's crony media.


What is happening to our beautiful America literally makes me sick to my stomach. We absolutely MUST NOT reelect any incumbents and thoroughly vett self-described "conservative" candidates for their conservative bona fides. Actions speak louder than words and we must not elect anyone who can't prove their conservative track record. The media are in the bag for Killary. Do not tune in to ABC, CNN, NBC, MSNBC. George Soros is pulling the strings and he is a hateful, despicable communist. People need to push back and push back HARD against the left-wing media and the Muslim/Marxist con-artist liar of a president. This is serious folks. Don't be a bystander. Be an active part of the pushback against Obama and his unAmerican ideology. He is NOT for America. He is against American ideals and American ways. He needs to be imprisoned and tried for treason.