GREAT NEWS: All of Hillary's Sensitive Emails Were Seen by Huma Abedin and Therefore the Muslim Brotherhood

Aaron Klein reports on another fascinating chapter in the Clinton Cavalcade of Scandals: 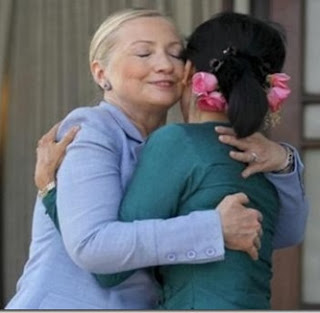 It was Abedin who forwarded to Clinton’s personal email address details about the initial establishment of the U.S. special mission in Benghazi, updates about security threats to both the mission and Ambassador Chris Stevens, intelligence on the growing terrorist threat in Libya and insider information on the Sept. 11, 2012 attack in Benghazi.

Abedin was privy to emails that contained the exact movements of Stevens while he was stationed in arguably one of the most dangerous zones in the world for any American diplomat.

[Abedin has both] personal and family ties to the Muslim Brotherhood and other to Islamic supremacists.

The connections not only extend to her mother and father, who are both deeply tied to al-Qaida fronts, but to Abedin herself...


While she worked at the State Department, Abedin was also a paid employee at Teneo, a strategic consulting firm that specializes in investment banking, business intelligence and restructuring services.

In one of dozens of emails released last week that included Abedin as among its recipients, on April 24, 2011, Abedin forwarded to Clinton’s personal email an internal State Department email from that same day written by Timmy Davis and sent to Abedin as well as to the State Department email addresses of other employees, including Clinton’s then-foreign policy aide, Jacob Sullivan.

...Startlingly, the email contained information about Stevens’ exact movements, including that he “will be meeting with MFA in one hour and will make a written request for better security at the hotel and for better security-related coordination.”

...The email reads: “We expect to get support in particular from the Turks who have a consulate in Benghazi. Mr. Stevens team has been in touch with Africom planners on the details of the mission. We have made the official request for support from OSD but have yet to get approval. Once we have that – and we hope that will be very soon – we will be able to move forward with the planning.”

Another email forwarded to Clinton by Abedin briefed Clinton about such specific matters as mission staffing and the temporary rotation of personnel at the mission.

...Abedin served as Clinton’s deputy chief of staff in the State Department until taking maternity leave in early 2012. In June 2012, she returned to the State Department while her title changed to deputy “special government employee.” According to reports, Abedin performed the mostly the same tasks under her new role.

Besides her consultancy job, Abedin advised the William Jefferson Clinton Foundation as well.

“The picture that emerges from interviews and records suggests a situation where the lines were blurred between Ms. Abedin’s work in the high echelons of one of the government’s most sensitive executive departments and her role as a Clinton family insider,” reported the New York Times in May 2013...

Just when you think the Clintons have hit rock bottom, they break out jackhammers and start tunneling down another layer.

HOW IS THIS WOMAN NOT IN JAIL? Mark Levin and I both want to know. You steal a $1 Snickers from a store, you have a criminal record. The little people go to jail.

You're Secretary of State and you keep secret correspondence on your private server, you share your secrets with the Muslim Brotherhood, you have a private slush fund of millions of dollars where you can sell your influence to the highest bidder, you help Russia get uranium, an ambassador is murdered under your watch, you lie before Congress...

And you're allowed to run for president! No worries!

This woman is not in jail because the American people have tampax where their balls are supposed to be. We need to rise up by the millions and place them all under citizen's arrest.

She should be arrested along with Hillary Clinton
DO NOT quit now Trey Gowdy. I agree whole heartily
with Anonymous. Seeing as how the CONSTITUTION is
only a CONTRACT; all Contracts are designed to be
BROKEN; not only that all contracts made under and
during the Obama administration are NULL & VOID:
That fact has not changed since day one of his
inauguration.