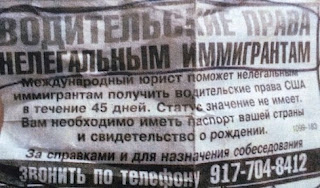 “We found two ads out of state … saying you can come here and get a driver’s license,” Capt. Drew Bloom, chief inspector of the DMV, told Vermont Watchdog.

“One of them was in Spanish and the other was in Russian,” he said.

The revelation comes days after DMV Commissioner Robert Ide said his department’s investigation into driver’s license fraud extended to foreign countries and even other continents.

In the first of two print ads obtained by Watchdog.org (above), a message in Russian translates as follows:

Your status does not matter. You need only a passport from your country and a birth certificate

The second ad (pictured right) is written in Spanish and features a sample Vermont driver’s license. The ad translates: 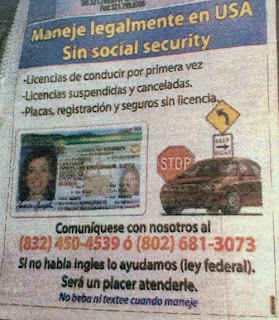 – Driver’s license for the first time

If you do not speak English we help (federal law)

It will be a pleasure to serve

No drink or text when drive

“In some of these cases, like with these advertisements, we did find there were people trying to act as brokers making money off these folks. … (They are) charging anywhere between $500 and $1,000 to allegedly help someone get a Vermont license,” he said.

While Bloom would not say if the ads were connected to any of the now-confirmed 231 fraud cases — up from 103 confirmed cases in February — DMV Commissioner Robert Ide told Vermont Watchdog on Monday the ads trace back to other states where multiple applicants admitted living when interviewed by investigators.

“Those ads have been in publications of various languages in the greater New York City area,” Ide said.

In 2013, the Legislature overwhelmingly approved S.38, an act that extended driving privileges to illegals living in Vermont. The Senate passed the bill 27-2; and the House voted 105-39 in favor of the legislation. The policy went into effect Jan. 1, 2014, about seven months after Gov. Peter Shumlin signed S.38 into law.

While S.38 was intended to help an estimated 1,500 to 3,000 resident illegal immigrants drive legally, it has since become a magnet for immigration fraud, attracting unqualified applicants from out of state, and even from outside the United States.

Presently, 10 states and the District of Columbia offer some form of driver’s permit to undocumented immigrants. While Tennessee and Oregon have repealed their laws, states like Colorado and New Mexico are in a heated push to do so.

Demesia Padilla, cabinet secretary of New Mexico’s Taxation and Revenue Department, told Watchdog in February that fraud in her state is also fueled by out-of-state ads.

“You name the nationality, we we’re getting it. … We actually had a Polish newspaper taking out an ad in Polish telling them that they would guarantee them a New Mexico driver’s license,” Padilla said.

She said an out-of-state website also played a part by listing what she called “the formula on how to defraud New Mexico for a driver’s license.”

In states that offer licenses to undocumented immigrants, the “formula” comes down to committing residency fraud.

In Vermont, driving privileges are limited to residents of the state who can show proof of residency. That means out-of-state residents seeking a driving credential must falsify address information, which they may easily do by providing two pieces of mail displaying their names with an inbound Vermont address.

As the foreign-languge ads advertise, to obtain a driver’s privilege card, people with no legal presence in the United States need only be able to show proof of birth and identity, which they may do using a passport or consular identification document. Criminal facilitators then fabricate the proof-of-residency part for the applicants.

As widely reported, facilitators flood Vermont residences and businesses with mail addressed to the out-of-state applicants, some of whom have likely responded to ads. The applicants then journey to Vermont, collect that mail for a fee, complete the required paperwork at a local DMV office, and take the required driver’s tests. When the process is completed, the DMV issues a driving credential to the out-of-state applicants, and the fraudsters get paid.

While New Mexico has a policy of breaking up such rings, and has won multiple convictions, Vermont officials say they have decided against that course of action.

“In all of the cases, the action we’ve taken enforcement-wise has been to suspend them here and revoke the credential. We haven’t done anything more than that,” Bloom said.

“We could have taken further enforcement action had we really wanted to find each and every person — it’s all a crime. At a minimum, it’s a misdemeanor. Or there’s a $300 ticket for making a false statement on an application.”

Ide confirmed on Monday that Vermont is not seeking to prosecute individuals. He would not comment on what role, if any, federal investigators from ICE or Border Patrol have in cracking down on the fraud.

Bloom said the vast majority of the 231 confirmed cases occurred prior to February. He said while new cases have occurred since then, the influx of applicants has slowed.

Bloom and Ide said increased press coverage since January may be helping deter ring leaders who plan elaborate schemes to defraud the state. According to Bloom, fraud cases began only months after the law went into effect in 2014, but surged during fall and winter.

On Monday, Vermont Watchdog attempted to gather information about ongoing fraud from a top official at the Agency of Transportation, who oversees the Department of Motor Vehicles.

Deputy Secretary Chris Cole, when asked if he knew about foreign language ads, replied, “I do not. I haven’t seen any advertisements. I don’t have any firsthand knowledge as to what is or isn’t happening.”

Who could possibly have or seen this? What we need is to get rid of the US criminal codes, then there will be no crime!