Border: Recent busts of murderous MS-13 gangsters put the lie to President Obama's sympathetic amnesty narrative of illegal immigrants as "workers who mow our lawns, make our beds (and) clean out bedpans." 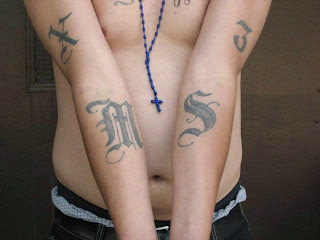 Authorities Wednesday rounded up 37 MS-13 gang members in Charlotte, N.C., on racketeering conspiracy charges, along with charges of murder, attempted murder and firearms violations. All of them are illegal aliens from El Salvador, Honduras and Guatemala. Several are round-trippers — illegals who broke in once, committed crimes, got deported and broke back into the U.S. — proving that our border is porous and unsecured.

Charlotte police discovered the rat's nest of foreign gangsters after some of them started shooting up local nightclubs and bars.

Reading the indictment, much of the money these immigrant hoods raise from illegal gang activity is wired back to El Salvador to arrange for even more gangsters to come across the border.

The funds are wired back to Central America through remittances that Obama has made cheaper and easier for illegals to send through new Consumer Financial Protection Bureau rules on banks.

"The alleged MS-13 gang members have committed numerous violent crimes, including armed robberies, assaults, and murders, for the benefit of the criminal enterprise," prosecutors said in a statement.

The catalog of their alleged crimes runs 17 pages in the indictment. Several pages list suspected gang members charged with "illegal re-entry by an aggravated felon," or entering the U.S. illegally after they had already been deported.

It's not immediately clear if any of the suspects had been given amnesty under Obama's DACA executive order for younger illegal immigrants.

But the busts come on the heels of the deferred deportation the Obama administration granted to vicious Charlotte gangster Emmanuel Jesus Rangel-Hernandez.

Rangel-Hernandez, 19, was placed in the removal process in March 2012, following drug charges, but was shielded from removal by the administration even though it knew of his gang membership. He is now charged with the murders of four Charlotte residents, including former "America's Next Top Model" contestant Mirjana Puhar.

All three suspects were members of MS-13.

These same illegal immigrant thugs are terrorizing Los Angeles, Chicago and even the nation's capital. Hundreds have been arrested in Los Angeles within the last two years. MS-13 originated in Los Angeles and has spread to states across the country.

There are more than 6,000 already in the U.S. illegally, and dozens more are coming across the border daily. And though they routinely commit crimes, immigration officers don't kick them out of the country. That's because our president has told ICE to stand down.

Arrests of immigrant gang members under Obama peaked in 2012, then dropped by more than 25% in 2013 and continued to decline in 2014, according to arrest records released by ICE in response to a Center for Immigration Studies FOIA request.

Clearly, even violent gang members are not a high priority for enforcement. These are the beneficiaries of Obama's executive amnesty program.

Obama makes it seem as if all illegals in the U.S. are hard-working and honest laborers seeking a better life, when in fact many of them are murderous thugs who are building a criminal network spanning both coasts.

His rationale for granting them amnesty is a terrible falsehood and a threat to homeland security.

Who do you think distributes then hundreds of tons of U.S. Senate Drug Cartel illegal narcotics to the streets ?