So, About That Obama-McConnell "TPP" Trade Deal... 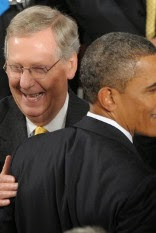 The Senate finally did something intelligent on trade...

President Obama suffered a defeat at the hands of his own party on Tuesday, as Senate Democrats blocked a key component of the president's trade agenda.

After fierce lobbying on both sides of the issue, the bid to start debate -- on expanding the president's authority to negotiate trade deals -- failed on a 52-45 vote. It needed 60 votes to advance ... "What we just saw here is pretty shocking," Senate Majority Leader Mitch McConnell, R-Ky., said, accusing congressional Democrats of standing with "special interests."

The problem with these trade deals in general, whether it be NAFTA, the most-favored nation status granted to China and others, is that when they involve "developing" or "third world" nations they simply enable wage and environmental arbitrage.

It is expensive, in relative terms, to avoid poisoning the air, water and land.  There is little that is cheaper than simply running a pipe to the nearest body of water and dumping your toxic waste in it; essentially every means of treating that waste to make it safe, or recycling it is more expensive.  All things being equal if you're a manufacturer that uses toxic materials (and most do) if you can put your plant where nobody will stop you from dumping the toxic waste, you will.

This doesn't make the person who does that evil -- it just makes them a capitalist.  In a world where there is no legal constraint on this behavior and where the local population where you put the plant wants the plant why not put it there?  After all isn't the very premise of capitalism the unfettered voluntary exchange of one thing for another by willing parties?  I'm not going to get into the weeds with the fact that many of these nations have repressive governments or worse, along with legal codes that effectively prohibit organization by labor and civilians impacted by these policies (particularly environmental destruction) that could rein in such abuses; that is a criticism to level at political systems, not corporations.

But the fact remains that the impact of such so-called "free trade" policies in the United States is to decimate the job base that is available to everyone on the left hand of the bell curve.  I remind Mitch, and everyone else, that this is half of the US population!

It's one thing to say that we'll find a way when the very bottom of our population in the intelligence and ability lottery has the jobs available to them destroyed.  It's quite another when half of the country has the same thing happen.  Further, no nation can survive if it produces only services; a service creates nothing.

You must create things to build actual value in your nation, whether it be television sets, computers, cars, trucks, cows or roads.  That is, you must either mine, manufacture or grow something.  All of the services have value only to the extent that they support and enable these acts, and it is almost always true that they have less value than the predicate item's creation.

The person attending the gas station may be worth $9/hour but the fuel itself is worth $2.50/gallon, and he sits in the chair while 500 gallons of fuel an hour, or over $1,200 worth of product, is sold.  Likewise while the car repair person may make $20/hour the car itself cost $25,000, and absent the car there is no need for the repair.

I support open trade with nations that have comparable cost of living and environment constraints to the United States.  Those nations can and should have free and open access to our markets provided we also have the same access to their markets on the same terms.

But nations that do not have similar conditions must not have that same consideration.  Our good and services on a like-for-like basis will be much more expensive than those produced locally, and those produced there will be much cheaper than here.  The reason isn't because their people are better, or their government more adept, it is simply because their people have a lower standard of living and enforce fewer protections for the environment around them.

If we offshore those jobs to that nation then we destroy our own manufacturing base and with it the value creation that this nation needs, right here at home, to be prosperous.

We've done far too much of this and it's time for the trend of destroying the future of fully half of our population to stop -- and be reversed.


"All things being equal"..."If"... Typical Denninger. He's determined to panic his readers, so he omits any consideration of the myriad reasons where and why his suppositions would prove false. This, from a writer who loves to tell the rest of us how dumb we are. It is to laugh.