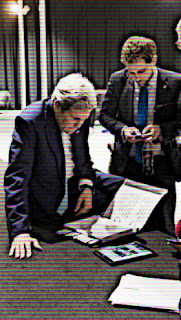 It seemed like a typical day for President Obama. He taped a TV interview on trade, hosted the champion NASCAR team on the South Lawn and met with the defense secretary in the Oval Office.

Not so typical was something that didn’t appear that day on the president’s public schedule: notification to Congress that he intends to renew a nuclear cooperation agreement with China. The deal would allow Beijing to buy more U.S.-designed reactors and pursue a facility or the technology to reprocess plutonium from spent fuel. China would also be able to buy reactor coolant technology that experts say could be adapted to make its submarines quieter and harder to detect.

The formal notice initially didn’t draw any headlines. Its unheralded release on April 21 reflected the administration’s anxiety that it might alarm members of Congress and nonproliferation experts who fear China’s growing naval power — and the possibility of nuclear technology falling into the hands of third parties with nefarious intentions.

Mufson goes on to relay the ominous concerns of the Nonproliferation Policy Education Center. It worries not only about the proliferation of spent nuclear fuel from U.S.-designed reactors, which is bad enough, but the fact that Obama has also unleashed restrictions on key nuclear energy technologies like coolant pumps.

These pumps could be repurposed or reengineered for use in submarines.

Combined with then-President Bill Clinton's utterly criminal behavior, reportedly accepting donations in exchange for releasing key missile guidance technologies to the Red Chinese, it would seem that the leaders of the Democrat Party are determined to trigger a nuclear holocaust.

The only question is why?

"The only question is why?"

Because they are communists.

If Obama were a Communist who hates America, how would he behave differently?