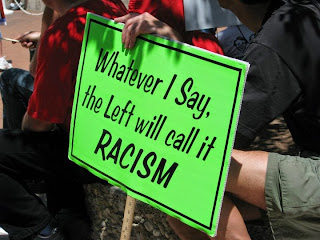 Ever since the junior senator from Illinois announced his candidacy for the presidency eight years ago, those who have criticized his politics and his ideology have been pummeled with a charge of “racism.” It’s been the perfunctory, knee-jerk response – devoid of intellectual integrity or factual relevance – to avoid the substantive issues, while attempting to simultaneously stifle dissent and silence critics. And it’s clear from early indications with regard to the 2016 presidential race, that the same modus operandi will be employed against those critical of Hillary Clinton. Only this time it will be gender based – the charge of sexism.

During the Obama tenure, the charge of “racist” has been unavoidable to any who were critical of the president. Whether it was criticism of Obamacare, lack of transparency, fiscal profligacy, inscrutable foreign policy, class-envy fomentation, and anti-capitalist policies, it didn’t matter. Regardless of the logic, data, facts, or strength of argument, if you opposed the administration policies and initiatives, you were a racist. At least according to the sycophants, who were either oblivious to logic, data, or facts, and had an empty logical quiver from which to fire back with anything except blanks. 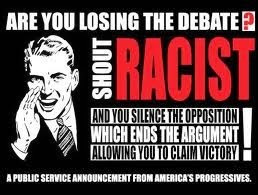 And what’s pathetic, from a free speech, open discourse, and cogent political discourse perspective, is that it worked. The millions of Americans who flocked to Tea Party rallies, Glenn Beck confabs, and other conservative functions, were successfully labeled “racists” because of their opposition to the liberal, destructive policies of the administration. It didn’t matter what color, race, creed, or socio-economic status they hailed from, they were all racists.

For some reason, the fact that the policies propounded and foisted on the nation the past six years are not race-based seems lost on the vapid purveyors of the “racist” tactic. Big government, massive debt, onerous regulations, expansive government control, and the concomitant loss of personal liberty are naturally opposed not because they might be advanced by someone of a certain color, ethnic background, or native language. They’re opposed because they’re antithetical to the founding principles of our republic! It matters not who is foisting the destructive policies and ideology on the nation; it matters that they’re distinctly anti-American. Conservative Ben Carson’s current lead in the crowded GOP primary race underscores that fact.

What’s brilliant about the tactic, is that you don’t have to worry about any facts, data, or common sense to employ it. Just by hurling the accusation several things have been accomplished with one fell swoop. 1) The argument has been misdirected, so it’s no longer about the policies or the substance of the disagreement, it’s now whether the dissenter is truly racist or not. 2) It neutralizes and diminishes the objections of the dissenter, for now the greater issue is whether he is in fact racist, or not. And 3) it successfully stifles dissent, since no one, probably even real racists, likes to be called one, so why go out on a limb and face the probability of such an accusation?

And now it appears that Hillary Clinton supporters will use the same tactic. Just last month a pro-Hillary group, self-dubbed the HRC Super Volunteers, warned journalists that they were going to be watching vigilantly how the media reports on Hillary’s campaign. Group member and co-founder, John West, was thoughtful enough to serve as an early warning system on the words that cannot, I repeat, cannot be used to describe the probable Democrat candidate for president. According to West, “polarizing,” “calculating,” “disingenuous,” “insincere,” “ambitious,” “inevitable,” “entitled,” “over-confident,” “secretive,” “will do anything to win,” “represents the past,” and “out of touch,” are all apparently sexist code-words that the media are to not use when describing the candidate.

According to West, “Already we have seen the coded language of sexism and innuendo used by major news outlets and we are not happy,” followed by a list of examples from major news sources and their egregious use of such sexist vernacular. As a student of language and etymology, I have to admit I was unaware those words and phrases were definitionally sexist.

But alas, I shouldn’t let myself fall into their misdirection and accusatory trap. It’s not that those words are sexist, it’s just that they’re so accurately descriptive of the presumptive Democrat nominee that using the terms will earn the consternation of Hillary devotees, hence justifying accusations of sexism. By couching those terms in a sexist context, they can as easily avert factual criticism of Hillary as they did in protecting Obama. Just like the accusations of “racism;” it has nothing to do with what is true or what is factual, it has everything to do with ensuring electoral success and neutralizing the opposition by attempting to shape and control the language.

Those of us who are bitter clingers to our freedom, our liberties, and the principles the nation was founded on, shouldn’t allow ourselves to be rebuffed or silenced by the non-thinking Alynski devotees who utilize these nefarious and polarizing tactics. And remember, if that’s their primary tool to fight back with, you know that logically you’ve already won, because their only defense is casting aspersions ad hominem.

There are two things even more disturbing than a group attempting to regulate political speech. One, that the liberal-biased media may well comply, and play their game; and two, that for a large segment of our unenlightened and uninformed electorate, their “sexist” tactic will work.

Well personally I'm of the opinion that people who allow their mental inferiors (any & all libs) to dictate the terms of the the communications environment (so called controlling the language) are bringing it upon themselves for not agressively challenging it everytime...

I use the retort: "And, you're a political linguistic coward for resorting to that pejorative. What else ya got?" Works. Every. Time. Heads explode/implode, conversation - over.

Great perspective. This has been going on for years, formalized by Saul Alinsky with his Rules for Radicals. Alinsky is misspelled in the article.