ELIZABETH WARREN STRIKES BACK AT OBAMA: Declassify the Trade Agreement!

I strangely find myself in agreement with Senator Warren 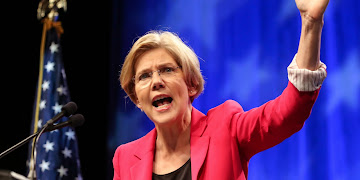 (Reuters) U.S. Senator Elizabeth Warren hit back at President Barack Obama in their tussle over “fast-track” authorization to negotiate a Pacific Rim trade treaty, a power she says could be used in the future to weaken Wall Street reforms.

The president, who wants expedited negotiating power to streamline the passage of trade deals through Congress, said last week that Warren’s claims were “absolutely wrong.”

Warren, a Massachusetts Democrat and prominent liberal voice, stuck to her argument in an interview published on Monday with a Washington Post blog, saying Obama should release details of the Pacific trade talks so legal experts can determine if a pact could be used to weaken U.S. bank rules.

“If the president is so confident it’s a good deal, he should declassify the text and let people see it before asking Congress to tie its hands on fixing it,” Warren said in the interview with the Plum Line blog.

One has to wonder exactly why the trade deal is classified. Why it cannot be released for public view. Why Congress critters can only view it in a secure room, cannot have any recording devices, be watched over as you read it, and cannot take any notes they make with them.

From the Plum Line interview

PLUM LINE: But don’t you get 60 days to review it after the deal is finalized, with the authority to revoke fast track?

WARREN: The president has committed only to letting the public see this deal after Congress votes to authorize fast track. At that point it will be impossible for us to amend the agreement or to block any part of it without tanking the whole TPP. The TPP is basically done. If the president is so confident it’s a good deal, he should declassify the text and let people see it before asking Congress to tie its hands on fixing it.

From the Right and also conspiracy minded folks, they are concerned that the trade deal could lead to massive gun control in terms of blocking weapons and ammunition coming into the country.

All that said, why, exactly, is this deal so heavily secret? One of the folks in the comments at the Plum Line notes “you can tell this article is propaganda, no journalist has read the text, so how does he know!?” The commenter is correct, no journalist has read the text. Nor have most in Congress read it. Nor have We The People read it. Because it is being kept super-secret. Call me a conspiracy minded fool if you must, but one has to wonder why a trade deal is being treated in this manner, why it has to be kept so secret.